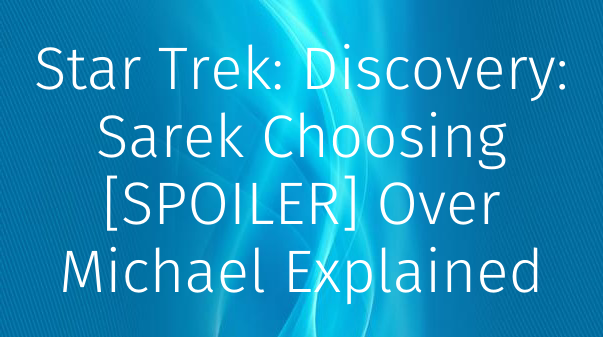 In the latest episode of Star Trek: Discovery, "Lethe," we were given our most detailed, insightful look yet at the series' relationship most tied to the franchise's roots - Michael Burnham and her surrogate father, the Vulcan Ambassador Sarek.

After her parents were killed, the human Burnham was taken in by Sarek and his human wife, Amanda. The show initially framed Burnham as simultaneously being a child of two worlds; a human who could never fully integrate into Vulcan society, though so thoroughly entrenched in their ideology she would be alienated from humanity. We already know it was Sarek's idea for Burnham to join Starfleet, which was originally suggested as something of a consolation for the fact she wasn't cut out for life as a Vulcan, but "Lethe" adds a considerably wrinkle to that storyline.

Injured by a Vulcan extremist en route to a peace summit with the Klingons, Sarek is left for dead in a damaged ship in a hostile part of space. Sarek and Burnham share a connection through the Vulcan katra (as seen in "The Battle of the Binary Stars"), and Burnham attempts to track Sarek down through their psychic link, but she's met by seemingly unexplainable resistance from Sarek when she enters the memory of the day he told Burnham she had been rejected by the Vulcan Expeditionary Force.

As she pushes harder in a desperate attempt to save Sarek, she eventually sees the truth; she wasn't rejected because she wasn't up to the Vulcan's standards, she was rejected because Sarek was given a choice. Only one of Sarek's non-Vulcan children would be allowed entry, either the human Burnham or the half Vulcan, half human Spock. Sarek chose Spock, who ironically would go on to reject the Vulcans' offer and join Starfleet himself.

Sarek's decision, on the surface, might seem as cold and logical as any other Vulcan would make. As a biological half Vulcan, Spock likely would have had the easier time integrating into the Vulcan Expeditionary Force. And yet, unlike other Vulcans, Sarek felt deep shame over his choice, as well as the fact that he concealed the truth from Burnham.

There isn't a plethora of well-defined Vulcan characters to compare him to, but Sarek has always displayed a commendable compassion for humanity that most Vulcans seem to lack. He did, after all, marry a human woman, and while his relationship with Spock was often frayed, he was rarely able to conceal his deep love for his son, and he would disregard logic and protocol in an attempt to revive him in Star Trek III: The Search For Spock.

Sarek has presented Burnham as his "ward," though it's becoming more and more obvious that, for all intents and purposes, he considers her his daughter, and is being forced to grapple with the same complex emotions for her that so deeply defined his relationship with Spock. Adding a never before mentioned sibling for Spock always seemed like a questionable choice, but it might end up enriching both Discovery's morally complicated lead as well one of the franchise's most celebrated supporting characters in ways no one could have foreseen.

Picard Season 2 Is Secretly A Sequel To A Classic Q Star Trek: Voyager Story
About The Author

Dusty Stowe has been writing for Screen Rant since 2016. A native of Yorktown, Virginia, he moved to Los Angeles in 2010 to pursue a career in the entertainment industry. He currently writes lists, features, and news articles covering movies, comics, and television. He is a devoted fan of Doctor Who, DC Comics, and whatever David Lynch deems us worthy of viewing. Star Trek: The Next Generation lit up his five year-old brain like a firework, ensuring he’d be a progressive nerd for the rest of his life. His current focuses are on covering the Arrowverse, Star Trek: Discovery, and the DC Cinematic Universe. He is also a trained audio engineer with a degree from the Los Angeles Film School, and manages multiple corporate social media accounts. He really, really wants a new Green Lantern movie. You can talk to him about football, politics, and his weird nerd takes on Twitter @dustystowe.