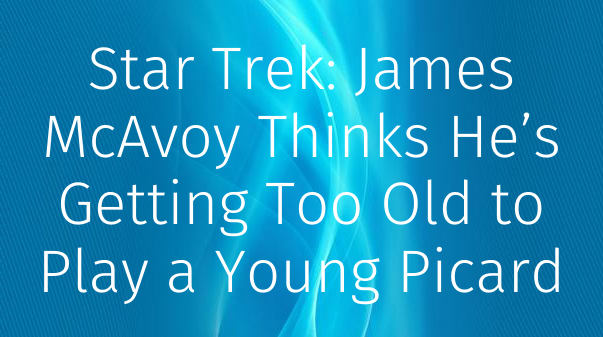 James McAvoy thinks he's getting too old to play a young Jean-Luc Picard in any potential Star Trek reboot. Captain Picard is one of the beloved science-fiction franchise's most popular characters, made famous by English thespian Sir Patrick Stewart in the TV series Star Trek: The Next Generation. The Scottish McAvoy has played a younger Stewart character before, taking over the role of Professor X in the X-Men franchise.

While the Star Trek canon is always being expanded, it has recently received a major reboot, with J. J. Abrams' 2009 film reimaging the characters from The Original Series in a brand-new timeline. While a fourth installment in that series might be on its way, the franchise has since turned its attention back to television, with a number of shows currently on or in development for Paramount+. If McAvoy was to play a young Picard, he might even get the chance to repeat his X-Men feat of doing it alongside Stewart, who is soon to appear in Picard season 2.

However, as told to Collider, McAvoy feels he's getting a little old for that role at 42. The actor has spoken about his love of Star Trek before, he says, and has half-seriously floated himself as a worthy successor to Stewart. Despite feeling like the clock is ticking on that part, he can't rule anything out in today's media landscape:

I mean, I've often talked about loving Star Trek, and jokingly, but also kind of seriously been like, if you ever want to do a young Jean-Luc Picard, I'm your man. But I'm probably getting close to being too old to do a young Jean-Luc Picard now. So there's that. [...] But then, now we live in the land of remakes, so there's always a chance. There's always a chance that you're going to get on a show. But the only one that comes to mind is Star Trek, I think. I've always loved it. Always.

Elsewhere in the interview, McAvoy remembers when he and a friend heard about Peter Jackson's The Lord of the Rings, and how they felt the loss of that opportunity. "I remember me and my mate, Ross, just sitting in a pub and just being like, 'What's the point of becoming an actor? They've already made the best story ever written.'" He does point out, though, that even Tolkien's world is being revisited through Amazon's upcoming Middle Earth series, so there's always a chance that something opens up.

Much like Stewart, McAvoy is a talented, versatile actor as likely to perform Shakespeare on stage as he is to be the captain of a starship on TV, and fans would likely welcome him getting the chance to play Picard. Unless the new Star Trek film turns its attention to The Next Generation characters, however, it does seem unlikely to happen anytime soon. But, as McAvoy himself says, this era of IP-worship keeps everything in play, and enough noise from fans could be enough to make that a reality.

Alex is a Movie/TV News Editor & Writer at Screen Rant. After graduating from Brown University with a B.A. in English, he spent a locked-down year in Scotland completing a Master’s in Film Studies from the University of Edinburgh, which he hears is a nice, lively city. He now lives in and works from Milan, Italy.