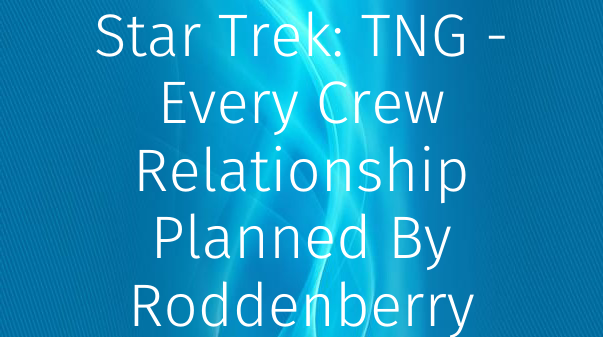 Before his death, however, Roddenberry was heavily involved with the show and penned a writers/directors guide, or series "bible" to outline the creative team's vision for the series. The bible contains character biographies, notes about sets, costumes, and props, some story guidelines, and a restating of the Star Trek mythos. The fact that it is written by Roddenberry himself makes it both a fascinating read and an interesting piece of Star Trek history.

Within the character biographies in the bible are the seeds of many crew relationships that Roddenberry was hoping to incorporate into Star Trek: The Next Generation. The relationships range from platonic to romantic, and while many of them will be quite familiar to fans, others might be a surprise. Additionally, there are a handful of relationships on The Next Generation that Roddenberry did not plan but were included and have come to hold an enduring place in fans' hearts.

Captain Jean-Luc Picard and his First Officer Will Riker are remembered for their close, almost parental relationship, something Roddenberry intended from the start. In the bible, Roddenberry described Picard and Riker's personal relationship as that of either a younger and older brother or a father and son, Picard mentoring Riker with the expectation that he is a "captain-in-training" in Roddenberry's words. This dynamic is set up in Star Trek: The Next Generation's pilot episode, "Encounter at Farpoint", which showcases the two men's first meeting and figuring out how to work together.

Picard and Riker's relationship was also allowed to evolve throughout the series. The two of them eventually moved away from the more parental relationship and came to view each other as trusted colleagues, equals, and ultimately friends. Building on this, fans were recently treated to a heartwarming look at Picard and Riker twenty years on in the first season of Star Trek: Picard, something that cemented the fact that their friendship has been strong enough to stand the test of time.

Another relationship that Roddenberry set up in the bible was the possibility of a romance between Captain Picard and the ship's doctor, Beverly Crusher. Roddenberry made it clear that Picard and Crusher's relationship would be relatively fraught and ambiguous, mostly because on some level Crusher still blamed Picard for her husband Jack Crusher's death. This resentment was supposed to provide a major stumbling block to the relationship evolving.

While Crusher ended up harboring less resentment than it seems Roddenberry intended for her to on the show, her and Picard's relationship did remain relatively ambiguous, never quite getting past the very good friends stage. Still, in the season 7 episode "Attached" Picard and Crusher did finally acknowledge their complicated feelings for each other after being telepathically linked, ultimately deciding to remain friends. Their romance is one that fans still have an interest in, however, and with more of The Next Generation cast rumored to return for the second season of Star Trek: Picard, there could be the possibility of further exploring it in the future.

Roddenberry also always intended Picard to become a reluctant mentor to Doctor Crusher's teenage son, Wesley. Although a divisive character among fans, Wesley Crusher was always meant to be a series regular. His and Picard's reluctant father-son dynamic was planned from the start, although Roddenberry stated in the bible that Picard promoting Wesley to acting ensign in the first season had as much to do with the Captain's romantic interest in his mother as it did with Wesley's abilities.

The first few seasons of Star Trek: The Next Generation featured a number of moments where Wesley earned Picard's respect while performing his duties on the Enterprise-D. Perhaps one of the most memorable instances of Picard mentoring Wesley, however, was in the season 5 episode "The First Duty." The scene in which Picard dressed Wesley down for lying about his part in an accident that resulted in the death of a fellow Cadet at Starfleet Academy was not only memorable but perfectly illustrated the relationship the two characters had; Picard strove, sometimes harshly, to make Wesley the best version of himself, and Wesley always tried to make Picard proud.

Will Riker and Deanna Troi's Romance

The relationship between Will Riker and Deanna Troi is perhaps one of Star Trek's greatest successful romances. However, Roddenberry intended originally for Troi and Riker to only dance around each other romantically. He stated in the bible that the two had met before working together on the Enterprise-D, and felt an attraction when they first met but were committed to keeping things strictly professional between them while on duty. Additionally, Roddenberry planned to make Riker much more naive about women, something that was supposed to keep Troi from ever truly falling in love with him.

The creative team of Star Trek: The Next Generation instead chose to take the relationship in a different direction and wrote in the backstory that Riker and Troi had actually been in a romantic relationship that ended before their time on the Enterprise-D. This created a whole new layer of tension between the two. Despite this, Riker and Troi did mostly dance around each other romantically during the course of the series, both entering in and out of other relationships during the show's seven seasons. Their romance was only rekindled again during the Next Generation movies, but this time it resulted in their marriage at the beginning of Star Trek: Nemesis. Star Trek: Picard revealed that the two were still married twenty years on, and had had two children together.

Roddenberry also set up the friendship between Data and Geordi La Forge in the series bible, intending for the two to feel a connection because of what they perceive as their shared limitations. Because of Data being an android and Geordi being blind, Roddenberry stated in the bible that the two characters would share the desire to be "fully human". Roddenberry also alluded to the fact that engineer in Geordi would be drawn to Data precisely because he was an android and a scientific curiosity.

Data and Geordi La Forge are remembered as perhaps one of the most iconic friendships in the Star Trek franchise. Although Roddenberry's plans for the two of them to bond through their desire to attain "true" humanity never played out so overtly on the show, Geordi and Data still enjoyed a friendship based on mutual respect and admiration. The two often worked together in Engineering or ran holodeck programs during their off-duty hours, including the Sherlock Holmes program that gave rise to a subplot that gave Star Trek: The Next Generation some of its best episodes.

Roddenberry Relationships That Were Cut From TNG

While many of the key crew relationships Roddenberry had planned ended up on the show, there were a few notable exceptions. One of the most interesting ones was a planned friendship between Lieutenant Tasha Yar and Wesley Crusher. Because of her violent childhood, Yar was supposed to treat Wesley like the childhood friend she never had, and regard him as "the most wonderful person imaginable." This certainly would have been an odd friendship and might have lead to some uncomfortable tension between the two because of their age difference, so it makes sense why the idea was cut from the show before it aired.

In addition to this, Geordi La Forge was supposed to foster a mentoring relationship with many of the children on the Enterprise-D by helping out with the onboard school. Roddenberry even described the school as Geordi's "specialty" in the bible. It is unclear why the idea of Geordi helping out at the school was cut from the script; the subplot would have added an interesting dynamic to the character and was perhaps a nod to actor LeVar Burton's work on the children's television show Reading Rainbow. Still, Geordi did still get to take on a mentoring role with Wesley Crusher at times after Wesley was promoted to acting ensign.

In the same vein, the romance between Worf and Deanna Troi was another relationship that seems not to have been planned. Although Worf and Troi were only involved romantically for a brief period in The Next Generation's 7th season, the relationship is a memorable one for fans. Worf and Deanna were certainly an odd couple which is perhaps why their relationship didn't last very long. Even after their romance ended, however, they remained friends, and Worf even attended Deanna and Will Riker's wedding.

Star Trek has always been a franchise that finds great success in stories that are driven by character relationships, and Star Trek: TNG is no exception to this. Some of the most memorable parts of the show are ultimately driven by one particular friendship or romance that ended up being important to fans. The Star Trek: The Next Generation series bible offers a fascinating look inside the mind of Gene Roddenberry and what he intended for the show, as well as providing a baseline to show how what he intended for the crew's relationships with each other evolved over time.

Dana Hanson is a trainer and freelance writer for Screen Rant, covering stories about Star Trek for the Movie/TV feature writing team. She attended Emerson College in Boston, Massachusetts, graduating in 2019 with a degree in Media Arts production and a concentration in Writing for TV and film. She has previous experience working with an online and print publication as a freelance editor and has been passionate about both writing and Star Trek for years. She currently lives in Pennsylvania.