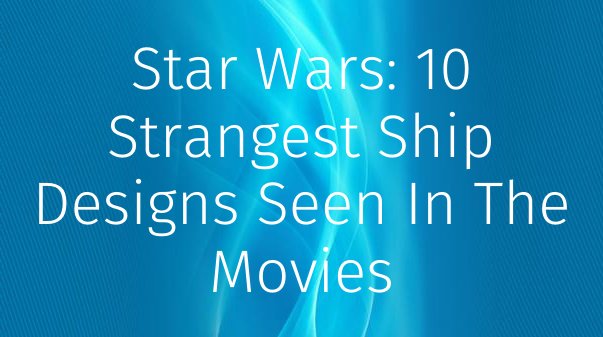 Throughout Star Wars, there are a plethora of iconic ships that fans totally adore. The Millennium Falcon is one of the most iconic things in the franchise, so too are the likes of the X-wing and TIE Fighter. Some ships even act as cool homes for characters. As badass as many ships in the franchise look though, there have always been comments on the design of some ships in the saga, with some just being odd.

Whether it be because they look totally impractical, because they seem as if they would break apart with a single hit, or even if they are just unnecessarily ugly, Star Wars is full of strange ship designs.

In general, the ships to come out of the Confederacy of Independent Systems, a.k.a the Separatists, were severely ugly and rarely as cool as their Republic counterparts.

The droid control ship at the middle of the Separatist's blockade of Naboo was worse than normal. The design is akin to the old sci-fi saucer design, and being so circular and open, the ship is extremely vulnerable. Therefore on top of being ugly, it was an extremely strange design even if the Separatists were not counting on too much firepower coming at it.

Slave 1 is undoubtedly one of the most beloved and iconic ships in Star Wars, right up there with the Millennium Falcon. While it may be memorable, and while it may add to the badassery of Boba Fett, the design has always seemed strange.

Based on a street light, the ship looks very weird when landing, with its back becoming its bottom. Flying the ship is undoubtedly cool, but a lot of that cool factor is removed when it lands. There is then the interior which the ship has to rotate around to make the pilot continuously vertical. Overall the ship is great, but there are some strange design aspects to it.

The High-Altitude Entry Transport-221 is not the most well-known ship in Star Wars. It is not even a ship that appears much in the movies, being in Revenge of the Sith for a matter of seconds.

With a giant AT-TE canon on top, the ship transports five passengers at a time, allowing them to jump out as it hovers above the ground and is just a bit of an interesting ship if anything else. In Legends, it was used as a gunboat and a drop-ship, but the ship is so obscure with only one appearance that there is very little information on it. That is not to say the ship is bad; weird in Star Wars can make for some great stuff, especially comic book arcs, but this ship is definitely odd and looks more like a Separatist ship (for which it was originally intended).

The sequel trilogy is often hounded for its lack of great original ships, often rehashing the original trilogy ships with new paint. This makes sense for the Resistance, a small movement,  but disappointed fans, especially when ships like the troop transport get to exist.

The ship is bizarre when flying, looking like a shoebox in the air. The ship is only used to transport people from point A to point B, but still, it is incredibly awkward looking. The ship is made from parts of different crafts, which adds to the Resistance's underdog feeling. However, that does not make the ship any more aesthetically pleasing.

The First Order had far more resources than the Resistance and so got to have grander, cooler ships throughout the course of their conflict. The AAL-1971/9.1 Troop Transport was a failure in that regard.

The ship is akin to the prequel trilogy gunboats. However, the biggest flaw of the ship is the fact that the small part on top of the ship which sticks out is where the pilot is. One shot, one accidental hit to that area, and the ship will go down. Again, it is not designed for action, but that does not mean the design is not odd.

The C-9979 Landing Craft was a heavy transport ship used by the Separatists to overrun planets, including Naboo, with their battle droids, and for that purpose, it works. For pleasing the eyes, though, it fails massively.

The color scheme of the Separatists is rarely something of beauty; it does not need to be. But with its giant wing-like arms, the ship looks like an Earth plane in some aspects, just bigger, weirder, uglier, and controlled by a central computer. Not a bad ship, convenient for the Separatist's needs, but strange and unpleasant.

The original trilogy gave audiences so many brilliant space fantasy ships; most of the iconic ships in the Skywalker saga were born in the trilogy, and the Nebulon-B frigate is one of the recognizable ones from the movies.

Used as a hospital ship, the frigate is not necessarily built for mass combats and assaults, which is good considering it looks as though it would break in half by simply turning around. Of course, Star Wars defies belief, and that escapism is what audiences love. However, this ship, while nice to look at, does not seem like it should work as well as it does.

Star Wars is space fantasy, so fans do not care massively for real-life physics when there are in-world rules and explanations for all the beautiful Star Wars nonsense. In some aspects, though, the Solar Sailer is maybe too real.

Its solar-energy-powered parachute allowed it to fly without fuel, a cost-effective way of managing slow space travel. In Star Wars, though, it seems pretty ridiculous to have such a thing. It does not fit, and after thousands of years of technological advances, there must be other propulsion systems out there that are better for Dooku's demands for the ship, especially with his elegance and smarts. On top of that, it does look incredibly strange, especially when compared to other ships in the Galaxy.

The B-wing is an anomaly of a ship in Star Wars. It is quite beloved yet totally ridiculous in its design and has made nowhere near as many appearances as expected of a simple starship that is so iconic.

The ships look fairly unflyable and goofy. The fact that the pilot is not in the center of gravity would create some serious issues for judging forces while maneuvering. The gyroscopic stabilization of the cockpit is interesting. However, this ship will forever be peculiar in its design, no matter how loved it is for its reduced role in one of the original trilogy's best battles.

For over forty years, one of the worst and strangest ships in all of Star Wars has been the Twin-Pod Cloud car found on Bespin in The Empire Strikes Back.

The ship looks utterly pathetic in reality. Akin to a pair of potatoes, the ship's design is incredibly odd. It requires a pilot in charge of flying on one side and another individual in charge of weapons on the other, with the pair of pods connected by the engine. An un-intimidating, ugly, quirky little ship native, ironically, to one of Star Wars' most beautiful planets