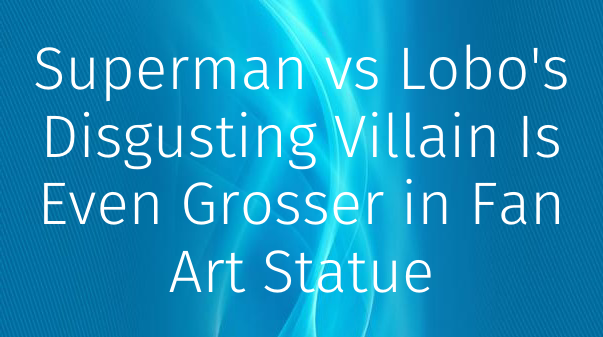 Numen has been a thorn in the side of both Superman and Lobo, and now this disgusting being gets even grosser in a new, fan-made statue. The central adversary in the recent Superman vs Lobo Black Label mini-series, Numen was created by writers Tim Seeley and Sarah Beattie and artist Mirka Andolfo, and Seeley took to social media to share his amazing find.

After wiping out his own species, the virtually indestructible Lobo would go on to become one of the most feared bounty hunters in the universe. He has come to contact with Superman on several occasions; the Man of Steel is one of the few Earth heroes who is a true match for Lobo in terms of strength and endurance, leading to some truly epic fights. The two tangled once again in 2021’s Superman vs Lobo mini-series. In the three-issue series, readers learn that Numen, drawn to resemble a tardigrade, was born in a distant universe, coming to ours seeking knowledge and wisdom. Upon his arrival, Numen became one of the most popular beings in the universe—and became intensely jealous of both Superman and Lobo’s popularity. To that end, he engineered a fight between the two titans. The series was written by Tim Seeley and Sarah Beattie, with art by Mirka Andolfo.

In a Tweet, Numen co-creator Tim Seeley shared an Instagram video, by @triclawfx, that detailed the statue. As noted earlier, Numen was created to resemble a tardigrade, a microscopic life form, and Triclawfx’s statue highlights this. The video treats readers to a thorough look at the statue, set to a thrashing heavy metal riff. Seeley himself commented on the Instagram post, suggesting that Triclawfx make Dr. Filk, another character in Superman vs Lobo, next; when Seeley shared the post to Twitter, he tagged co-creator Andolfo in the post.

Someone made a NUMEN from SUPERMAN VS LOBO, @Mirkand ! https://t.co/YiAQiEdgCP

Numen may be one of the newer villains in the DC Universe, debuting last year, but he has already made an impression on fans, as seen in TriclawFx’s amazing statue. Part of Numen’s appeal is that he is powerful enough to manipulate both Superman and Lobo, two of DC’s most powerful beings, and force them to fight—all because of jealousy. The tardigrades that served as inspiration for Numen are believed to be some of the most versatile creatures in the known universe, able to survive in a variety of environments, ranging from the bottom of the ocean to the depths of space. The tardigrade is tough, and a survivor—just like Superman and Lobo.

Superman and Lobo have tangled before, but in Superman vs Lobo they were brought together by a common foe—the disgusting Numen, who has now been immortalized in a fan art statue.

Shaun Corley is a pop culture enthusiast living in the Pacific Northwest. After stints in both customer service and academia, he's turned his attention to writing about comic books--his lifelong passion. He is a graduate of Radford University, with a degree in English. When not reading comics, he enjoys spending time with his fiance and their dog.