Superman's Symbol is Now The Opposite of Hope in DC Comics 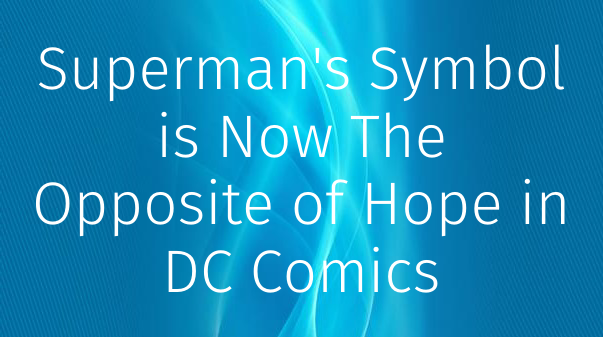 Superman's Symbol is Now The Opposite of Hope in DC Comics

As one of DC Comics’ most notable icons, Superman’s classic shield on his chest is a well-known symbol of hope, but thanks to a shocking development in the pages of Action Comics, it now means something entirely different. Superman’s iconic family crest means many things to many people, both in comics and even in the real world, and now, one of Superman’s most powerful foes has corrupted that symbol for his own dark purposes.

With Clark no longer willing to allow Mongul’s reign of tyranny over Warworld continue, he’s set out alongside his newly formed Authority to bring the cosmic dictator to justice. Action Comics #1036 by Phillip Kennedy Johnson and Daniel Sampere sees the team finally making it to Warworld in hopes of taking the fight to Mongul. But what they find waiting for them is more heartbreaking than they could have ever expected.

After months of buildup, this issue sees Superman and his ragtag Authority at long last make their way to the alien planet. Greeted by the corpse of a dead slave high above the atmosphere, the team heads down to investigate when they notice Superman’s familiar shield emblazoned across the landscape of the planet. When Clark questions a mysterious phantom about the remaining subjugated Phaelosians, he is directed towards a trail of crucified Kryptonians with Superman’s shield and the words “so say the dead” branded on their chests in the language of the Monguls.  As Superman looks on, the stranger explains that on the planet Warworld, “He who has never killed is weak, for he has only himself. A great warrior is strong, for his word carries the weight of many slain.” And by branding Superman’s known symbol for hope and justice to corpses of the “weak,” Mongul hits Superman right in the heart.

By associating Superman's iconic shield and the morality it represents with weakness, Mongul has used his overwhelming dominance to turn a beacon of strength into a cursed symbol in his culture. Using the Superman icon as a tool of indoctrination into a cruel, gladiatorial slave society, he proves himself to already be steps ahead of Superman in the most dangerous way possible. With such a dark and personal action directed towards the Man of Steel, this newest Mongul has already proven himself to be an incredible threat to Superman. Aside from his raw power and the vast resources at his disposal, he’s managed to deeply hurt the Last Son of Krypton on a visceral and emotional level. By corrupting the symbol of Kal-El’s family, he’s dealt a crippling blow both towards Superman’s morale and potentially to his reputation throughout the cosmos if the message ever spreads beyond Warworld.

The crest of the House of El is universally known as a symbol of hope. Unfortunately, on Warworld, it means something entirely different. And if DC Comics fans really want Superman to come out on top against the monstrous Mongul, all they can do is hope.

Tristan Benns is a freelance writer, grad student, and lifelong geek. He's worked as a tutor, an editor, and even a salesman in a comic book store. If he isn't asking you about your feelings on the Oxford comma, he's probably asking you to name your favorite Green Lantern.