Supernatural: How Every Main Villain Was Defeated (& Who Beat Them) 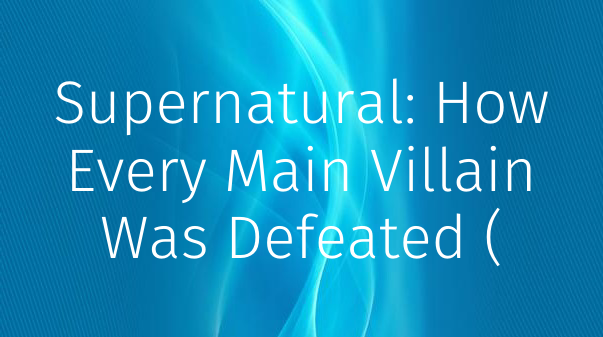 Supernatural: How Every Main Villain Was Defeated (& Who Beat Them)

How were each of Supernatural's big villains finished off? As Earth's greatest defense against the paranormal, the Winchester brothers and their allies have faced all kinds of monsters, demons and legendary beings, coming out on top each time, the odd death notwithstanding. Currently, Supernatural is in the final stretch of its climactic season and God is Sam and Dean's main adversary. It remains to be seen how the Winchesters will overcome this huge final hurdle.

Part of the reason Sam and Dean's fight against God feels so unpredictable in Supernatural season 15 is the wide variety of methods the brothers have deployed in order to defeat their past foes. From powerful weapons and formidable allies to possession and trickery, the Winchesters have used every trick in the book to defend against dark threats, with viewers never entirely sure how a big fight will go down.

Azazel - Ol' Yellow Eyes was the first major Supernatural villain and was shot by Dean Winchester with the Colt after an assist from the boys' deceased father in season 2's finale.

Alastair - Responsible for torturing Dean, Alastair was a very personal villain, but was actually killed by Sam using his psychic abilities in season 4's "On The Head of a Pin."

Ruby - Although she had a fling with Sam, the Winchester brothers double-teamed the demon Ruby. Sam held her, and Dean stabbed her using a special knife Ruby herself had given the boys while masquerading as their ally.

Lilith - Lilith had the honor of dying twice in Supernatural. Originally, she was killed by Sam's psychic powers, although this was part of her grand plan to resurrect Lucifer. In season 15, Michael destroyed Lilith while she was working for God.

Zachariah - Hated the Winchesters and the feeling was mutual, Dean probably didn't feel too bad about stabbing Zachariah in the head with an angel blade in season 5's "No Point of Return."

Raphael - As an archangel, Raphael perhaps should've put up a better fight, but he was effortlessly destroyed by Castiel, who had just absorbed all the souls of purgatory as a means of powering-up in the season 6 finale.

Eve - Proving the Winchesters don't always use force, Dean slyly poisoned Eve, the mother of all monsters. The oldest of the Winchester brothers mixed phoenix ash with his whisky and lured Eve into biting him, knowing the ash was fatal to her.

Dick Roman - Having killed Bobby, Dick Roman's death was never going to be simple. Sam and Dean constructed a bone weapon that could kill Leviathans, and Dean stabbed Dick in the neck with it while Castiel held the villain. No, it probably isn't a coincidence that Dean "boned" Dick.

Abaddon - Dean risked his sanity to gain both the Mark of Cain and the First Blade, which he combined to kill Abaddon, a Knight of Hell, in season 9.

Metatron - God's troublesome scribe was actually imprisoned for his wrongdoing. But Metatron made amends for his misdeeds and briefly held back Amara, who easily killed him. Speaking of which...

Amara/The Darkness - Amara is fairly unique as a villain in the sense that she isn't defeated. Instead, Dean manages to talk The Darkness around, and she remains alive as of Supernatural's final season.

Alpha Vampire - In a glorious return for the Colt in Supernatural, Sam manages to shoot the head vampire with the iconic overpowered gun thanks to some help from Mick of the British Men of Letters.

British Men of Letters - Although Arthur Ketch is the chief antagonist from the British Men of Letters in Supernatural season 12, the plum-voiced villain changes his ways. The group itself is taken out by a team of hunters led by the Winchesters, with Jody Mills finishing off the leader with a gunshot to the head.

Crowley - More an antihero than a villain, Crowley teamed-up with the Winchesters in order to defeat Lucifer. Crowley killed himself as part of a spell to seal the rift between worlds and trap The Devil in a parallel universe. Unfortunately, this didn't last long.

Asmodeus - Asmodeus chained up the archangel Gabriel and fed off his grace, increasing the demon's own power. It was only fitting when Gabriel escaped, was restored, and incinerated Asmodeus in revenge.

Lucifer - Desperate times call for desperate measures, and after Lucifer fed off his own son to gain greater strength, Dean made a deal with the devil to beat the devil. Allowing himself to be possessed by Alternate Michael, Dean was strong enough to pierce Lucifer with a gold archangel blade.

Alternate Michael - Naturally, Dean's possession didn't end well, and the boys ended up fighting Alt. Michael before too long. Though they couldn't defeat him, Lucifer's son Jack could by using his enhanced angelic power.

Supernatural season 15 is currently on hiatus.

Craig first began contributing to Screen Rant in 2016, several years after graduating college, and has been ranting ever since, mostly to himself in a darkened room. Having previously written for various sports and music outlets, Craig's interest soon turned to TV and film, where a steady upbringing of science fiction and comic books finally came into its own.
Craig has previously been published on sites such as Den of Geek, and after many coffee-drenched hours hunched over a laptop, part-time evening work eventually turned into a full-time career covering everything from the zombie apocalypse to the Starship Enterprise via the TARDIS.

Since joining the Screen Rant fold, Craig has been involved in breaking news stories and mildly controversial ranking lists, but now works predominantly as a features writer.
Jim Carrey is Craig’s top acting pick and favorite topics include superheroes, anime and the unrecognized genius of the High School Musical trilogy.