Terminator: 10 Things That Made The First Two Great (That The Other Sequels Have Missed) 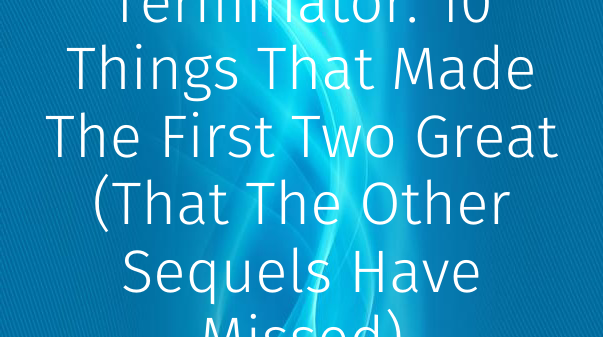 Terminator: 10 Things That Made The First Two Great (That The Other Sequels Have Missed)

1984’s The Terminator and 1991’s Terminator 2: Judgment Day are two of the greatest science fiction movies ever made. Thanks to fiercely original ideas, iconic characters, riveting action set pieces, and complex storytelling, James Cameron’s two initial Terminator outings are timeless gems. Unfortunately, the subsequent sequels — all four of them — have failed to live up to the high standard set by Cameron.

Even when Cameron himself returned to the franchise to produce last year’s Terminator: Dark Fate, fans were left disappointed. Here are 10 things that made the first two Terminator movies great that have been missed by the sequels that followed.

10 Not Getting Pigeonholed By A Formula

Like the first Terminator film, the second one revolved around a Terminator going back in time to kill a Resistance figurehead only to be thwarted by another time traveler with more heroic intentions.

But with the introduction of John, two Terminators being pitted against each other, and Sarah being a ruthless badass, T2 was a completely different movie with a completely different story. Unfortunately, ever since T2 was hailed as one of the greatest sequels ever made, the sequels have been lazily sticking to its formula.

The message behind the Terminator movies is that the future isn’t written and we decide our own fate. The first two films stood by this message. In T2, Judgment Day’s back on because Miles Dyson has gotten ahold of the T-800 technology from the first film’s climactic fight and started working on Skynet.

But by the end of the movie, the message still rings true. However, as more and more movies have come out, Judgment Day and the fall of humanity seem increasingly inevitable.

8 The One-Liners Are A Nice Touch, Not A Crutch

There are plenty of quotable one-liners from the first two Terminator films, from “I’ll be back” to “Hasta la vista, baby,” and they’re always a lot of fun. But James Cameron never used the one-liners as a crutch; they were just a nice touch on top of generally well-crafted dialogue.

In the subsequent sequels — particularly the ones that have gone overboard with the self-aware “humor,” like Terminator 3: Rise of the Machines and Terminator: Genisys — Arnold Schwarzenegger has been used as nothing more than a cheesy one-liner delivery machine.

Any story that deals with time travel and artificial intelligence and a social uprising has a huge bank of thematic potential. James Cameron did a great job of exploring the Terminator franchise’s themes — from the morality of assassinating Miles Dyson to the persistent “There is no fate but what we make for ourselves” message — without letting it get in the way of the action.

The sequels have focused too much on delivering cool set pieces and not enough on the subtext. As a result, the sequels’ themes have been muddled and flimsy.

However, as long as the characters in the sequels have been more than arm’s length away from the Terminatrix or the Rev-9 or the T-5000 or any of the other new Terminators, they’ve been totally safe. They hardly ever feel like a real threat.

Exposition is always tricky, especially in science fiction stories. There’s a lot to explain — e.g. what a Terminator is, why it wants to kill Sarah Connor, why Kyle Reese is so keen to save her etc. — and wordy explanations have a tendency to bore audiences. However, James Cameron’s scripts for the first two Terminator movies (the first one was co-written with Gale Anne Hurd and the second was co-written with William Wisher) did a great job of weaving the exposition into the dialogue.

It never ceased to feel like a real conversation, and the information was doled out to us in manageable chunks at a suspense-building rate. The sequels’ exposition has been clunky and agonizingly on-the-nose.

James Cameron conceived and shot the first Terminator movie (and, to an extent, the second) as a combination of science fiction and film noir. The camera angles and lighting effects and anxiety-inducing tension of old Bogart movies were transplanted into a modern setting with sci-fi tropes and visuals. It was a fascinating subgenre — dubbed “tech noir” by The Terminator’s nightclub scene — and gave the Terminator franchise a unique feel.

Ever since Cameron left the Terminator franchise — and, according to the missteps made by Dark Fate, even when he returned to it — the sequels have been missing this cinematic sensibility. From Terminator 3 onward, the franchise is just a series of big-budget sci-fi action blockbusters.

Computer-generated effects didn’t exist when James Cameron made the first Terminator movie, and they were in their infancy when he made the second one. As a result, those two movies are filled with practical effects. When CGI is used, it’s more effective, because it’s sparing and the viewer isn’t numbed to it.

The filmmakers behind the Terminator sequels — including Dark Fate, surprisingly, which was produced by Cameron himself — have relied too heavily on CGI. When CGI effects fill every frame, it’s just overkill, and the audience will get bored quickly.

The post-T2 sequels have tried to go bigger and flashier with each movie. The stakes are absurdly high, with unsuspecting characters deciding to put their life on the line to save the world in a matter of minutes. Personal stakes will always resonate more with moviegoers.

But the sequels have failed to hook viewers with a premise that feels like it needs to be turned into a movie. They’ve all been an awkward twist on T2, with Schwarzenegger’s T-800 fighting new Terminator models.

Ben Sherlock is a writer, comedian, independent filmmaker, and Burt Reynolds enthusiast. He writes lists for Screen Rant and features and reviews for Game Rant. He's currently in pre-production on his first feature (and has been for a while, because filmmaking is expensive). You can catch him performing standup at odd pubs around the UK that will give him stage time. Previously, he wrote for Taste of Cinema, Comic Book Resources, and BabbleTop.