The Flash of DC One Million Returns To Comic Canon 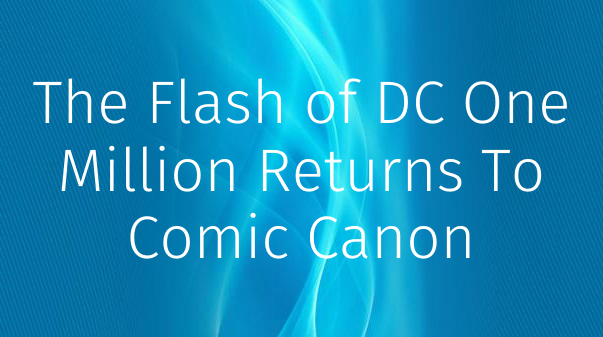 The Flash of DC One Million Returns To Comic Canon

If anybody embodies the concept of legacy in DC Comics, its theFlash. Every generation has a speedster, a group of people connected by the Speed Force, and the Flash continues to inspire people thousands of years into the future. Since the Speed Force has become synonymous with time travel, the Flash has been able to meet and work alongside future Flashes, such as Jonathan Fox, the Flash from the 27th century whose return in Flash #761 marks his first appearance since 1998's DC One Million.

Created by Mark Waid and Mike Parobeck for the Flash Special #1 (1990), Jonathan "John" Fox was a Central City historian hailing from the 27th century, specifically the year 2645. When the timeless Flash villain Manfred Mota returned to destroy Central City, John was sent back in time to seek help from one of the present-day Flashes. Although his retrieval was a failure, the process somehow granted John superspeed and allowed him to return home where he vanquished Mota and became the Flash of his century. He later chose to defy Time Institute laws and traveled back in time to fill in as Flash when Wally West became stuck in the 27th century, both of them eventually working together to stop an infamous Ice Age from holding back human civilization.

Although he was victorious, John's actions branded him a fugitive and unable to return to his century, he traveled further in the timeline and ended up at the 853rd Century. He settled in with the future Justice League called the Justice Legion Alpha as their Flash in a point in history where the legendary Legion protects the entire solar system, with John protecting the pivotal planet Mercury.  In DC One Million, John traveled with the Legion in time to invite the Justice League to the ceremony welcoming back the legendary Superman Prime after his self-imposed space exile spanning thousands of years. Swapping places with their historic counterparts, the League and Legion worked together to stop Vandal Savage and the evil artificial sun Solaris from killing Superman Prime before the big event. John has not been seen since, with his existence in question due to the changes done to the present-day DC universe and how that'd affect other future timelines.

In the issue by Joshua Williamson and Howard Porter, our story continues in the 853rd Century on planet Mercury where John returns, training his newest Kid Flash about the legacy they carry once they put on the costume. Confirming that the Flash Museum is a tradition continued that far in history, John tells Kid Flash about the current events unfolding between the Flash Family and Reverse Flash's Legion of Zoom. While the battle re-introduces further incarnations of Flashes stretching to the 30th Century, Kid Flash asks why they didn't find their way into joining their speedster brethren in their victorious battle. Reminding readers that the present is ancient history to people like John, the Flash's appearance comes with a cryptic gloominess, stating that the day is remembered as a tragedy instead of a victory. As the outcome of Flash and Reverse Flash's latest chase is yet to be revealed, it was good to see DC One Million's Flash's contribution to DC history has not been forgotten, even if it came with its own rain cloud.

Drew is a reader, writer, artist, and creative professional based in Westchester, New York. He dabbles into cosplay, movie references, comics, and some anime while also being a Ghostbuster. He has a Bachelors in History, a Masters in Publishing and is excited to be working with Screen Rant. Previously his articles have been featured on Comic Book Resources and Iron Age Comics and he's excited to see what happens next!