'The Hobbit': Benedict Cumberbatch in Mocap as Smaug 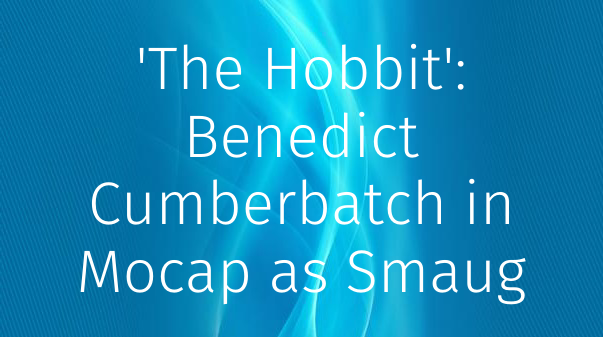 'The Hobbit': Benedict Cumberbatch in Mocap as Smaug

The video (above) reveals the extreme detail gone into Smaug's Oscar-nominated visual effects work, and the accompanying interview with Weta's David Clayton describes how actor Benedict Cumberbatch's vocal and physical work contributed to the creation of the centuries old dragon.

Apparently, Cumberbatch arrived at Weta in Wellington New Zealand in early 2012 to get the process started. The video gives us a brief, yet kind of hilarious, glimpse of him in a motion capture suit, writhing on the floor to generate realistic movements for the giant beast.

"Having Benedict in a mocap suit was lots of fun – for us, and hopefully for him too – and seemed to help him get immersed and home in on the character. "

Clayton goes on to say how Cumberbatch's vocal work helped Weta visualize the movements of the dragon's mouth and throat as well as other facial features like the eyebrows, adding:

"The translation of performance from Benedict to Smaug wasn't a one-to-one match like you'd get from a humanoid creature. They have very different psychologies. As animators we had to transpose the elements of Benedict's performance that were critical to the shot, such as head nuanced and facial expressions. We then built up the majority of his motion with keyframe animation."

One of the most visually stunning scenes in the film is when Smaug awakens from hibernation from underneath a massive pile of gold coins. The incredible way that the coins roll off of him and how both he and Bilbo interact with them throughout the rest of the scene were, Clayton says, no small task.

"We got creative with his locomotion through the gold by plowing him through the coins like a train through snow. This was a formidable challenge, as the VFX team had to simulate all the coins with each movement of the dragon. Some of the action sequences involved hundreds of millions of CG coins moving at once."

This short video shows us the incredibly intricate work that went into creating this film. But does The Hobbit: The Desolation of Smaug have a shot at taking home the prize on Oscar night going up against Gravity? All of theLord of the Rings films won their VFX Oscars, but The Hobbit: An Unexpected Journey lost out last year to Life of Pi. Win or lose this year, Smaug looked, and sounded, great.

The Hobbit: The Desolation of Smaug arrives on DVD and Blu-ray on April 8th, 2014.

Movies Where Nic Cage Was Already Playing Himself