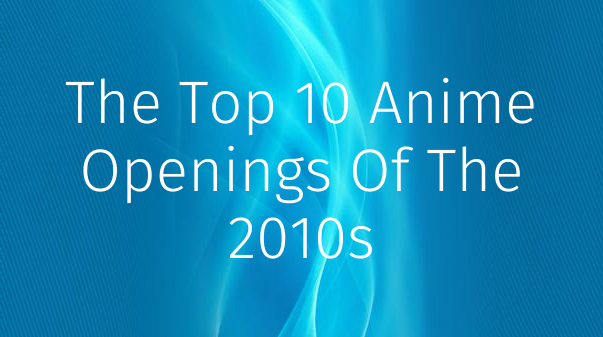 An anime's opening is the first thing viewers see, responsible for setting the tone for the rest of the show and capturing interest. A great opening song can become just as memorable as a classic show, remaining popular even decades later - as seen with Cowboy Bebop's "Tank" and Neon Genesis Evangelion's untouchable "A Cruel Angel's Thesis".

The 2010s were great for anime, seeing the release of well-loved series like Hunter x Hunter, My Hero Academia, and Puella Magi Madoka Magica. And along with these series came some equally incredible anime openings, with many becoming immediate fan-favorites. The past decade saw many, many great shows and openings, but some have remained stuck in viewers' heads.

LiSA has done quite a few opening songs, notably for series like Sword Art Online and Fate, but Kimetsu no Yaiba's (Demon Slayer) "Gurenge" shines as a highlight of her career. The opening song manages to capture much of Tanjiro's journey - his moments of loneliness and fear, his new friends and abilities, his bond with his sister, and the thrill and terror of the path that lays ahead of him.

The opening is at its best towards the end: measured bass drum beats build speed until the moment Tanjiro unleashes his Water Breathing - and the full force of LiSA's vocals. The song shifts into full energy, matching perfectly with the visual shift towards more intense imagery - enemy demons attacking, intimidating sweeps of the Hashira, and, of course, incredibly gorgeous animation of the characters' unleashing their Breathing Styles. Overall, "Gurenge" is an excellent introduction to one of the best recent demon-centric anime series.

2011's adaption of Hunter x Hunter brought the landmark series to a whole new generation of fans, animating a majority of Yoshihiro Togashi's legendary manga. In an unusual move, instead of changing openings per season or arc, Hunter x Hunter kept "Departure" as its opening song for the entirety of its run - only changing the accompanying animation to suit the current storyline. Considering the popularity and impact of the series, this made "Departure" an essential part of the Hunter x Hunter experience, cementing it as an unforgettable opening.

The song is an unarguably perfect choice for the influential shonen, full of the same wide-eyed passion and spirit as the characters. The belted vocals are as determined as Gon, matching the scenes of him and his journey animated along with it - especially his perseverance in the face of challenge and love of adventure.

One of Squid Game's notable predecessors in the 'survival game' genre,  Mirai Nikki (Future Diary) is best remembered for bringing pink-haired, knife-wielding yandere icon Yuno Gasai into the world. While the quality of its plot remains controversial, Yuno has remained a popular and influential character, which is largely unsurprising considering she's often the most exciting part of the show.

Yuno is largely the focus of Mirai Nikki's incredible first opening, which is perhaps why it is the other well-remembered part of the series. The opening is fast-paced and intense, featuring a host of unsettling imagery in a red-soaked and greyscale palette. The song's vocals are frantic, growing into nearly-breathless dissonance in the song's last moments before cutting off abruptly. It's a perfect match for the atmosphere of Mirai Nikki, as well as incredibly catchy in its own right.

Noragami's openings are excellent across the board, but its first had the same immediate, gripping impact as the anime upon release. A high-energy rock song clamoring with driving guitar riffs, clamoring drums, and a particular great bass part anchoring its first and final sections, it matches well with the cool urban fantasy of Noragami.

The visuals of the opening are great, showcasing a mostly grey-scale palette with each character bearing a specific single color - usually their trademark - or else only the background is colored while the characters remain in monochrome. This is especially eye-catching during the opening's action sequences, where the monochrome figures stand out starkly against blazing orange backgrounds.

"Flyers" is often criticized for not reflecting the heavy, thought-provoking atmosphere of Death Parade, but its sheer joy translates to the kind of celebration of life and human emotion that is at the heart of the series. However, instead of tackling this in the show's weighted existentialism, "Flyers" is a party - energetic and fun and full of catchy hooks and the promise of a good time.

Complimented by scenes of the Death Parade characters dancing and goofing around with each other, "Flyers" funk vocals and huge, big-band instrumentals make it almost impossible not to want to dance along - or, as the chorus demands, "put your hands up". The opening is not without its hints as to what's to come, featuring plenty of references to the events of the series, but the momentary break from the melancholy of the episodes is a welcome treat for fans.

JoJo's Bizarre Adventure is known for its spread of excellent openings - from Battle Tendancy's "Bloody Stream" to Stone Ocean's aptly named OP "Stone Ocean." Like the Parts themselves, a fan's favorite opening is often a highly-contested matter of personal taste, but Diamond is Unbreakable's "Great Days" almost always appears near the top of viewer's lists.

"Great Days" is upbeat, catchy, and colorful. It features eye-catching animation carried along by energetic drumbeats, big horns, and powerhouse vocals. However, the best version of Part Four's opening isn't the original, but the 'Bite the Dust' version that appears in episode 36 - playing on Killer Queen's newly revealed ability by throwing the opening into chaos. The visuals are reversed, looped, or distorted and Yoshikage Kira looms, giving this charming homage to the protagonist's journey a distinctly menacing (and memorable) overtone. "Great Days" is the third and final opening of Diamond is Unbreakable, closing out Josuke's story with all the style and flair he deserves.

2016's phenomenal Yuri!!! On Ice is an uplifting and heartfelt anime. Yuri is full of delightful figure skating routines and plenty of genuine emotion, and "History Maker" is a perfect match. Opening with a delightful marimba sequence, the song's soaring strings and waltzing horns come together to make something both triumphant and whimsical - providing a beautiful accompaniment to the memorable lyrics.

The animation of the opening is an ideal backdrop for the song too, its watercolor backgrounds and sketchy style seem almost like a fairy-tale. It showcases the skating animation that the show is so well known for, with the three protagonists gliding along to an incredibly earnest battle cry in perfect rhythm. Like Yuri!!! On Ice itself, "History Maker" sticks in the audience's hearts.

Madoka Magica's soundtrack was handled almost entirely by the legendary Yuki Kajiura and remains one of the best OSTs of all time. However, one of the only songs not written by Kajiura is the series opening, "Connect", and the dissonance this creates just further highlights the stunningly effective 'bait-and-switch' Madoka pulls on its audience.

"Connect" gives us a look at the version of Madoka that the first two episodes seemed to be promising. The show seen in the opening is lighthearted and sweet, absolutely nothing at all like the Madoka that actually exists. Getting this reminder at the start of every episode even further emphasizes the grim tragedy of Madoka Magica's infamous take on the Magical Girl genre.

TK's work for anime has always been outstanding, but Tokyo Ghoul's "Unravel" has fully solidified itself as one of the greatest openings of all time. The beginning's breathy, plaintive vocals and restrained instrumentals paired with solo shots of the characters in an empty expanse of sky captures the heartbreak and loneliness of the series, especially reflecting Kaneki's growing misery as he experiences life as a ghoul. However, Tokyo Ghoul is a horror series - it isn't all moping and soft tears and neither is "Unravel".

The drums kick in, the blue sky breaks, and the song takes on more of TK's usual post-hardcore stylings - showcasing his guitar playing with intricate, building riffs. The pace builds until Rize is shown on screen, there is a beat of silence, and then the song bursts into noise and energy - accompanied by a beautiful spray of color and shape emerging from Rize's back. It's an incredibly affecting moment in an incredible song, and its impact never fails no matter how many times it's heard.

Mob Psycho 100 is one of the most unique anime of the past decade, if not of all time, and easily one of the best. It's nothing like anything else, a perfect balance of weird and genuine, and is sure to endure as a beloved series. There is nothing bad to say about Mob Psycho, and its first opening, "99", is such a flawless encapsulation of everything that makes it great.

Bursting with color and grounded by the iconic counting and impressive vocals, "99" is strange and stunning. Jam-packed with energy, the opening carries the viewer at a breakneck pace towards its eventual '99' - ending in an incredibly satisfying 100 seconds. The animators clearly took the chance to show off, filling the opening with both traditionally impressive sequences and bizarre, dreamlike moments of brilliant color and imagery. It is absolutely full of details, plenty of which could spoil eagle-eyed viewers but are rendered almost incomprehensible without context, and the final product is a dizzying example of music and animation at their absolute best.