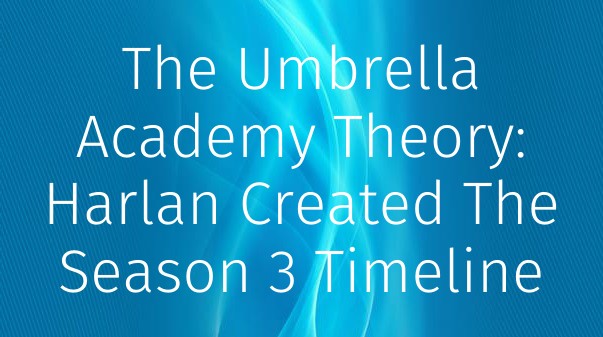 The Umbrella Academy season 2 saw the accidental creation of another superpowered kid when Vanya transferred her powers onto Harlan, who might be responsible for season 3’s timeline. Based on the comic book series by Gerard Way and Gabriel Bá, The Umbrella Academy jumped to the world of streaming in February 2019 thanks to Netflix, becoming an instant hit. The series was renewed for a second season shortly after, with the new batch of episodes arriving in July 2020.

The Umbrella Academy follows the Hargreeves, seven adopted siblings who along with other 36 babies were born on the same day, at the same time, and to women who weren’t pregnant when the day began. This caught the attention of scientist and billionaire Sir Reginald Hargreeves, who set out to adopt as many of those babies as he could, but he only got seven. The kids developed superpowers and Reginald trained them and formed the team known as “the Umbrella Academy”, but the siblings ended up parting ways. The Hargreeves reunited years later for Reginald’s funeral and to stop the apocalypse, but they couldn’t prevent the end of the world and their only way out was jumping to another place and point in time.

Season 2 caught up with the team in Dallas, Texas, but they landed in different years, between 1960 and 1963. The Hargreeves eventually reunited in 1963 to stop another apocalypse, but before they teamed up again, most of them rebuilt their lives as they were alone. Vanya was run over minutes after landing and was taken in by the family responsible for the accident, and she became very close to them, falling in love with Sissy (Marin Ireland) and forming a strong bond with her son, Harlan (Justin Paul Kelly). By the end of The Umbrella Academy season 2, Harlan was a superpowered kid with more control of his abilities than before, which might make him the one responsible for the new timeline in season 3.

As mentioned above, Harlan got his powers from Vanya, but it wasn’t intentional. Vanya was the one who made Sissy see that staying with her abusive husband, Carl, was no good for her nor Harlan, but it wasn’t easy for Sissy to make the decision of leaving him for good. Vanya and Sissy got into an argument over this matter, and Harlan heard that Vanya was leaving, so he ran away. Thanks to her powers, Vanya found him in a lake and rescued him, and while she gave him CPR, she unknowingly passed some of her powers onto him. Later on, in season 2, Harlan began to display his newly acquired powers which soon became chaotic and uncontrollable, and he turned out to be the new trigger of the apocalypse. Luckily for the Umbrella Academy, this time they were able to prevent the end of the world, and Vanya took most of Harlan’s powers away – but at the end of the season, he was shown in Sissy’s car levitating a toy, revealing he kept some of Vanya’s powers.

As Harlan got Vanya’s powers, he showed the same abilities as her but with no control, reminiscent of what happened with Vanya in season 1. Harlan could manipulate sound, which in turn granted him abilities like telekinesis, sound and energy projection, force-field generation, and levitation. Harlan is not powerless now, which makes way for many possibilities in The Umbrella Academy season 3, and his powers could have evolved with time, allowing him to do a lot more than protecting his family’s farm and redirecting bullets.

Why Harlan’s Powers Could Have Grown

Harlan was young when he got Vanya’s powers, so it’s entirely possible that his abilities grew with time, though that doesn’t mean he has full control of them, as he might have not had the same training as the Umbrella Academy. Given that the powers of the Hargreeves are still a mystery as they keep changing and evolving (look no further than to Diego, who showed some new abilities in season 2) and their source is still unknown, everything about Harlan’s powers is also a mystery. With that in mind, it’s possible that as he grew his powers evolved as well, getting stronger and developing new ones, and if he was already able to manipulate energy, he could have developed the ability to change reality as well.

Why Harlan Would Use His Powers To Aid The Umbrella Academy

Supposing Harlan’s powers evolved to the point where energy manipulation became the ability to change reality, he could use this to help those who helped him when he was younger. Harlan was already very close to Vanya, but he witnessed the rest of the Umbrella Academy saving him (and Sissy) from The Handler and the Commission Temps, so he would surely remember that and how one of the Hargreeves gave him his powers. Now, as a way to help them back, Harlan could look for a way to use his powers to aid the Hargreeves, even if he can’t do so directly as they are now in different places and points in time.

Why The Season 3 Timeline Would “Help” The Umbrella Academy

The way Harlan could help the Hargreeves, then, would be by making sure they don’t become “The Umbrella Academy”. Harlan witnessed Vanya’s struggles as well as those of the rest of the team and the burden of being superheroes, getting the accurate impression that they didn’t sign up to be heroes and were instead forced into it, and even though he was a kid when he met them, it was surely clear to him that the Hargreeves went through a lot of trauma because of their superhero status. If Harlan indeed developed the ability to manipulate reality and if he wanted to help the Umbrella Academy, he could have used this power to make sure Reginald never picked them as babies, thus making way for the Sparrow Academy. Of course, as Harlan had no idea Ben existed because he has been dead for years, Ben made it to the new team, and in a way, Harlan would have also saved him as he’s alive and well in this new timeline.

While the intentions behind the new timeline would have been noble ones, it will bring big and potentially dangerous consequences to the Umbrella Academy team as they don’t really know what they’re dealing with – there’s not only the Sparrow Academy, but Reginald is still alive (and isn’t exactly their fan after their meeting in 1963), Lila is on the run, the Commission is still operating (though under new management), and a new timeline surely made way for new threats as well. Harlan could then help the Umbrella Academy beyond changing their reality and creating a new timeline, becoming their most powerful ally. The different timelines and the creation of another superpowered kid makes way for a lot of possibilities in The Umbrella Academy season 3, and what’s for sure is that the (original) Hargreeves still won’t be able to take a break from saving the world.

Adrienne Tyler is a features writer for Screen Rant. She is an Audiovisual Communication graduate who wanted to be a filmmaker, but life had other plans (and it turned out great). Prior to Screen Rant, she wrote for Pop Wrapped, 4 Your Excitement (4YE), and D20Crit, where she was also a regular guest at Netfreaks podcast. She was also a contributor for FanSided's BamSmackPow and 1428 Elm. Adrienne is very into films and she enjoys a bit of everything: from superhero films to heartbreaking dramas, to low-budget horror films. Every time she manages to commit to a TV show without getting bored, an angel gets its wings.

When she's not writing, you can find her trying to learn a new language, watching hockey (go Avs!), or wondering what life would have been like had Pushing Daisies, Firefly, and Limitless not been cancelled. Breakfast food is life and coffee is what makes the world go round.

Guillermo del Toro said “hi” to her once. It was great.