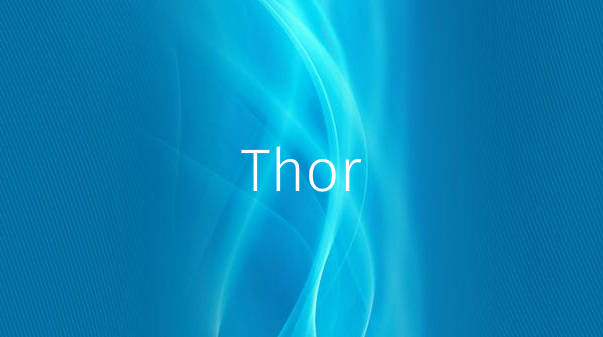 Superman and Thor have often been pitted against each other in battle, thanks to legions of comic book fans wanting to see which hero is stronger. In truth a no-holds barred fight between the two at their peak could decimate a universe as both the Son of Odin and the Last Son of Krypton have shown themselves to be powerful enough to move (and destroy) entire planets and even solar systems.

At one point, however, Superman and Thor showed just how powerful they could become when they were merged together to form the Kryptonian Thunder God, Thor-El. While this all new god only appeared for a few pages in a single DC/Marvel comic book, one can only speculate on how insanely strong he truly was.

“Thor-El” appeared in the Unlimited Access miniseries, which starred Axel Asher (aka “Access”) a man with the ability to cross between the DC and Marvel Universes and even up and down their respective timelines. While Access was charged with keeping the universes separate, he later learned that if he spent too much time in one, he would accidentally start causing crossovers and eventually make the two universes combine into a single “Amalgam” universe, possibly permanently.

To make things more complicated, an evil future version of Access had allied himself with the DC villain Darkseid and was using his powers to help Darkseid conquer both universes. Not only could this “evil Access” provide Darkseid with a way to cross between universes, he also had the power to create “Amalgams” of his own by combining DC and Marvel characters together into new, powerful beings. This allowed him to merge Darkseid's own foot soldiers with Magneto's Brotherhood of Evil Mutants, creating an even stronger army totally loyal to Darkseid.

Fortunately, the original Access learned he had the same abilities and decided to use his evil twin’s powers against him. First, he summoned several superheroes and teams from both universes – including the original Justice League, the (then) modern Teen Titans, the original X-Men, and Avengers (including Thor). When this only got the teams to fight each other, Access called in his biggest gun – Superman.

However, the Superman that Access teleported into the fight wasn’t the Man of Steel most people recognized. At the time, DC Comics was in the process of retelling a modernized version of the classic Silver Age Superman story “Superman Red and Superman Blue” where Superman split into two different beings, one red and one blue. To update the story, writers had Superman transform from a flesh-and-blood character into a blue energy being with an entirely different set of powers.

This “Blue Superman” did not have super strength but could create energy fields that lifted tremendous amounts of weight. He was also faster than his original form and could pass through walls instead of knocking them down. Eventually, he split into two beings – a red and blue energy Superman – with two distinct personalities. At the time Access summoned him, however, Superman was still a singular being who was able to use his energy powers to calm the warring super teams down and get them to work together.

“Working together,” however, turned out to have a more literal meaning than most team-ups. Thanks to Access’ new ability to create “Amalgam” heroes, the DC and Marvel characters agreed to be merged into new heroes to take down Darkseid’s villainous Amalgam forces. The new heroes formed the “X-League” which included Captain America Jr. (Captain America and Captain Marvel Jr.), Redwing (Robin and the X-Men’s Angel), Jean Black (Black Canary and Jean Grey), and Quick Freeze (Impulse and Iceman).

The most powerful member of the team, however, was undoubtedly Thor-El, the ultimate merger of Superman and Thor. Manifesting as a blue energy being wielding an energy mallet and wearing Thor’s cape and wingtips (with a stylized “T” on his chest), Thor-El possessed a regal bearing and a warrior’s spirit. Although the full extent of his powers remained unexplored, several of his lines gave some intriguing hints into his character and backstory.

Thor-El’s energy mallet gave him control of not only thunder and lightning but also alien energies. He appeared to worship (or was perhaps related?) to the Kryptonian deity Rao based on his battle cry, “By Rao – I say thee nay!” Few things could harm him – but “Nornonite” could lay him low and he could be exiled to the “Valhalla Zone.” In terms of strength, speed, and skill, he was more than a match for Magneto, who was frustrated at having to fight a “manufactured myth.”

Before the fight could drag on too long, however, Access tracked down and defeated his evil twin by merging himself with his double. With his best weapon lost, Darkseid called off his attack and conceded defeat Access subsequently restored the Amalgam Heroes to their original Marvel and DC forms, leaving readers speculating over how powerful Thor-El might have shown himself to be if he was pushed to his limit.

True, Superman’s powers were altered prior to the merger, but Thor’s physical powers should more than compensate for any shortcomings, while Superman’s greater speed and energy manipulation abilities in his blue form should have greatly add to Mjolnir’s might. It’s even possible that Superman’s vulnerability to magic could have been eliminated thanks to Thor’s influence.

It’s also interesting to speculate if the energy form of “Thor El” was a powered-down version of the Kryptonian Thunder God and if his ultimate form is more akin to what would happen if Thor and Superman merged at the height of their powers. As Superman can drag entire solar systems and Thor can resurrect galaxies with the Odin Force, just speculating on what an all-powerful Thor-El could do is staggering. Sadly, as Thor-El has not made any other appearances, readers may never know if he’s as powerful or stronger than Thor and Superman.

Michael Jung is a mild-mannered freelance writer-for-hire, actor, and professional storyteller with a keen interest in pop culture, education, nonprofit organizations, and unusual side hustles. His work has been featured in Screen Rant, ASU Now, Sell Books Fast, Study.com, and Free Arts among others. A graduate of Arizona State University with a PhD in 20th Century American Literature, Michael has written novels, short stories, stage plays, screenplays, and how-to manuals.

Michael’s background in storytelling draws him to find the most fascinating aspects of any topic and transform them into a narrative that informs and entertains the reader. Thanks to a life spent immersed in comic books and movies, Michael is always ready to infuse his articles with offbeat bits of trivia for an extra layer of fun. In his spare time, you can find him entertaining kids as Spider-Man or Darth Vader at birthday parties or scaring the heck out of them at haunted houses.