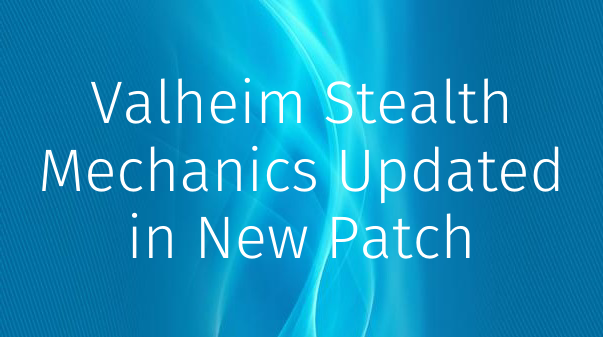 Developer Iron Gate AB just launched the latest update for Valheim, which improves stealth mechanics and lowers the damage output of those pesky deathsquitos. The co-op Viking survival game hit Steam Early Access earlier this month and already counts as an incredible success story. In just over a week, one million copies of the Early Access title have been sold - an impressive feat to say the least.

Valheim offers a survival experience similar to Rust, but, as the title suggests, features a Vikings-styled twist. Players assume the role of fallen warriors and can choose to team up with up to nine others. As a PvE game, survival is key in the procedurally-generated world, which is filled with monstrous enemies and the most dangerous of elements. Gameplay balance is everything, then, and it seems Iron Gate AB continues to work towards ensuring the overall experience feels as smooth as possible.

In a Steam post celebrating one million copies sold, Iron Gate AB shared patch notes for the latest update. The new patch most notably tweaks stealth-centric gameplay mechanics, as well as nerfs the deathsquitos by lowering their damage output. (Deathsquitos proved particularly worrisome, considering they were known to kill players in one hit.) With regards to stealth, players should now notice the addition of an indicator for awareness on enemy HUDs; the patch details additionally make note of general "sneak tweaks" and "AI fixes."

Since Valheim will remain in Early Access for an unspecified period of time, the latest update is not meant to tackle every issue. This, along with the previous patches, certainly seems like a solid start, however. And given the sheer amount of player feedback the studio is no doubt receiving, the experience as a whole is bound to continue improving as time goes on.

Valheim appears to have hit at the perfect time, given the increasing popularity of stories centered around both Vikings and Norse mythology. This brand of storytelling is particularly picking up steam games right now, thanks to the God of War series and last year's Assassin's Creed Valhalla. Fortunately, each of these titles are tackling Norse mythology from a different angle. Though there does admittedly exist some inevitable overlap, players would be hard pressed to find too many commonalities where it matters most.

Valheim is available to purchase now through Steam Early Access.

A Senior Writer on Screen Rant's Game News team, Brianna Reeves graduated from Sam Houston Statue University in 2018 with a Master of Arts in English Literature. Brianna's enthusiasm for games dates back to Mortal Kombat Trilogy on PlayStation 1, along with classics like MediEvil, Syphon Filter, and THPS2. However, Red Dead Redemption reinvigorated her love for the medium; hopefully, that passion reflects in the work she has contributed to Comic Book Resources, PlayStation LifeStyle, GVMERS, and Screen Rant.