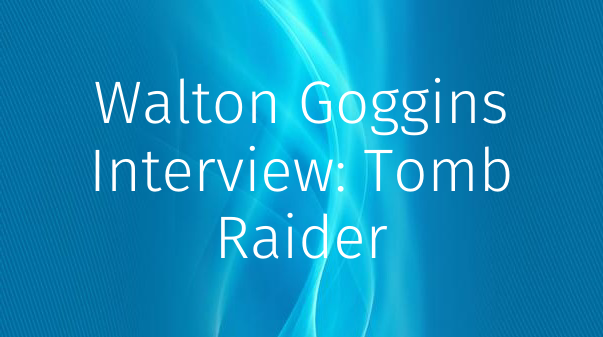 Screen Rant sat down with the amazing Walton Goggins to talk about his character, Mathias Vogel in MGM’s reboot of the Tomb Raider franchise. Walton is known for his roles in The Shield, Justified, and HBO’s Vice Principals. In Tomb Raider, his character is the villain of the film and adapted from the 2013 reboot of the video game series. In addition to discussing his role in the film, he talks about not revealing plot details to his family and wanting to maybe, possibly do a romantic comedy one day.

Screen Rant: So you had a chance to work on a lot of great projects as of late, what attracted you to the to the Tomb Raider franchise?

Walton Goggins: Well, you know, I suppose because I didn't think of it as participating in the Tomb Raider franchise, you know, that early on I just looked at the story and the story that I read was so good and so I think if you start from that point and you look at the incredible Alicia Vikander playing her and imagining kind of what her interpretation of this character would be and this director Roar Utwang, I loved his movie, The Wave and the great Graham King is one of my favorite producers, he’s Martin Scorsese’s producer for Christ’s Sake and I felt like I could do something, I could say something, or help them achieve . . . and get to where they wanted to go.

Screen Rant: I'm actually glad you said that because obviously, this is a video game franchise, but it's just a great movie, just in general, like you can take a video game, the Tomb Raider out of that, this is just a good movie, it’s a lot of fun.

Walton Goggins: Yeah, well that's very kind of you to say, you know I've never seen the movies and I've never played the video game and once these conversations kind of began in earnest. I didn't want to, because I think that I knew that there would be enough people around this project that understood the ins and outs of this game and knew how to service as you have to as you should and as you are expected to the devoted followers of this Herald and - but I also felt that you know, somebody needed to be at the table that is. . . judging this based on the merits of the story.

Screen Rant: That's really interesting you said that, because that was my next question. If you had no . . . I mean, I'm sure you knew about Tomb Raider. . .

Screen Rant: Sure. But I didn't know that you didn't play the games or anything like that, but that's interesting because what I was going to ask you next is, obviously Lara Croft is such an iconic character and now we're starting to see the empowerment of the female lead actress in films now, but she was doing this, Lara Croft the character was doing this twenty years ago almost. So, what is Lara Croft now especially since you've been a part of this franchise now, what does she mean to you now?

Walton Goggins: I suppose I haven’t said this anywhere else, so I’ll say it here. I suppose to summarize that answer, my answer that question, the most effective way to do it through the story and that is in my . . . I have a seven year old son, he's the love of my life, the greatest thing that I've ever been treated to in my life, and he came to set a few times and on the last day he was there he leaned over to me and pulled my arm and said Daddy, I think I want to be Lara Croft. I looked at him and I said I do too. You know, really and that was pretty cool.

Screen Rant: I mean you know what, to be honest with you, I thought the same thing when I was younger playing those games, because there wasn't there was a male counterpart of that, but it didn't matter to me, because she was such a just cool character which I find really attractive.

Walton Goggins: Yeah and I think that you know I mean that's you know that I think that's where we all want to go isn't it? I mean to celebrate differences between men and women, we’re different for a reason you know, and we bring different things to the table, but one knows I don't look and see a woman, I see an incredible person.

Walton Goggins: Right? And I think that you know things happen, there's a nexus of things that kind of happen and a movement that happens in all of the separate pockets and all of the separate places and then they will collide and, in an amphitheater, where what is seen will be different. And you know, this movie as it happens, it is a part of the conversation, and Alicia’s interpretation of Lara is worthy of that.

Screen Rant: Now, talk to me about Vogel, how would you describe him and his motivations from his point of view.

Walton Goggins: You know, I think that he is a person that at this point in his life is devoid of feeling. I think he's past the point of hope or optimism about anything in his life and I think even with his men, you know, there was a time where these days began with energy and the conversation to a point of pure isolation and then, and that's where you meet him and you meet him on the day that it all changes and it's as if it's not really changing when you meet him, because Lara Croft is a mirage and I think when you're in tent, hopefully you will be as disoriented as the lead of this movie and be taken on this journey of this guy, really understanding that his life is about to change. And how he feels about that or his lack of feeling about it and how that changes over the course of the movie. I just think that it's cool man.

Screen Rant: It is! It’s a super fun movie.

Walton Goggins: It’s really a different kind of way of looking at it and I haven't really seen a that in a way, in a while and I don't . . . I don't predicate the decisions that I make based on doing something different. I look at it as the truth and the truth shall set you free.

Screen Rant: Absolutely. So, I know you guys shot in South Africa, what was the most challenging things to shoot out there and also as an actor, I'm sure with every role you learn, what did you learn from this role of playing Vogel?

Walton Goggins: The most, I dunno, the most challenging. . . we were in Africa and there’s nothing challenging about that for me, it was one of the most mystical places I’ve been in my life and it changed my life, I had to travel and spend five days with the Ambo Tribe of the Angolan border and drove all over Libya. . .

Screen Rant: While you were out there?

Walton Goggins: Yeah, and I do that a lot of places, I’ll just go out by myself. And so those, that communion with those people, in that place, realizing that this is where we crawled out of the fucking ocean. It made me weep, you know, it was uplifting, so there was nothing challenging about making this movie because I love making movies.

I suppose the only, the only part where it was, where I would go home at night, have a glass of wine, and just try to hum because of the quiet, the buzzing in my head, was how dark this guy was, and how desperately he just wanted to see his family, you know, and I think we've all been in that place. . .

Screen Rant: So this is going to be a pretty big summer for you with Tomb Raider and then you got Ant-Man and the Wasp. . . What can you tell me about Sonny Birch?

Screen Rant: It's like the standard Marvel answer, right?

Walton Goggins: That's it man, I mean, you think Trinity’s everywhere? They have nothing on Marvel.

Walton Goggins: You know, and I'm protecting people that have made it, also I really protect my own experience of it, you know.

Screen Rant: Now, the last question, I love you as an actor, let me just say you're an amazing actor and you’re playing the villain role excellently.  You ever just want to do a romantic comedy every now and then and just kind of like . . .?

Walton Goggins: F*** man, you know, yes, the answer to your question is absolutely. And you know I don't know if I ever will man you know, I don't know the answer to that question, I do know that, you know, I've got a movie coming out later on this year, a really small independent movie, he's a deep complicated guy and I don't think he's a bad guy, it’s a father daughter story about a snake handling community up in Appalachia, called Them That Follow and that was really rewarding and I’ve done a lot of comedy over the course of my career and a lot of very serious things that just happen to be funny, but I- you know, I don't know, maybe the lighting, maybe that that much light on my face doesn't look good.

Screen Rant: Nah, you're great and you're and excellent actor thank you so much for your time.