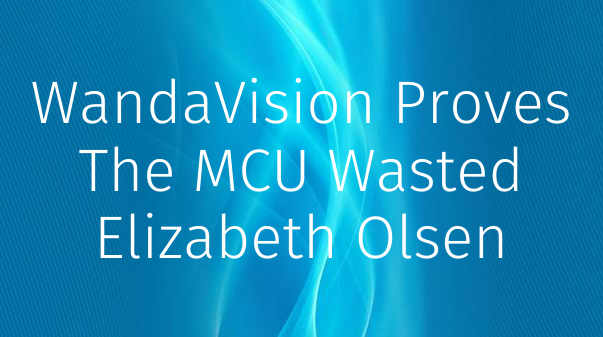 Elizabeth Olsen's magnetic performance in the opening episodes of WandaVision proves how badly Scarlet Witch was wasted in her previous appearances. Though the 31-year-old actor is best known for her portrayal of Wanda Maximoff in the Marvel Cinematic Universe, Olsen has flexed her acting muscles playing roles in character-driven indie films like Ingrid Goes West and Martha Marcy May Marlene. Unfortunately, Olsen's considerable talent simply hasn't been given the room it deserved as Wanda continually got lost in the shuffle during the sprawling Infinity Saga.

Olsen being overlooked in the MCU has much to do with how her character was written. Making her debut in 2015's Avengers: Age of Ultron, Scarlet Witch spent much of the film as an antagonist, used first by Hydra and then by the titular robot monster. That film gives a skeletal outline of Wanda's origins and sees her eventually align with the Avengers, but gives her little time to grapple with the loss of Pietro, Wanda's twin and last remaining family member. Captain America: Civil War uses Wanda as something of a McGuffin, having her accidental destruction in Lagos lead to the creation of the Sokovian Accords and reduced to a dangerous "weapon of mass destruction" by Tony Stark. Avengers: Infinity Wars features some lovely and ultimately heartbreaking scenes between Wanda and Vision, but their courtship occurs offscreen and Wanda's grief over the loss of her synthezoid lover is almost immediately interrupted by Thanos' Snap.

However, it looks as though Kevin Feige and Marvel Studios are making room for Wanda and Elizabeth Olsen at last. After teasing the character's incredible power during her memorable duel with Thanos in Avengers: Endgame's climactic CGI slug-fest, the MCU seems dedicated to making Wanda a prominent player in Phase 4, beginning with WandaVision. The series is a wild departure for the MCU, embracing traditions of classic American sitcoms for a Scarlet Witch character study of sorts. The trippy show is clearly a playground for Olsen, who expertly pivots from hilarious broad comedy to alarmingly haunting sequences that wouldn't be out of place in an episode of The Twilight Zone.

WandaVision is such an effective showcase for Olsen because it finally interrogates Wanda's often-sidelined grief, so central to her tragic life. By WandaVision episode 3, it's clear that Wanda has somehow constructed her fantastical TV Wonderland to cope with her considerable losses. The show's persistent laugh track and wacky hijinks serve Wanda as she tries to keep her fantasy alive, but there is a great feeling of sadness when one considers just how much devastating reality she needs to suppress - made all the more potent by Olsen's exceptionally multilayered performance.

It must also be said that WandaVision marks a refreshing commitment to the MCU's female heroes, who have historically been somewhat underserved. While Captain America, Iron Man and Thor have had entire trilogies to detail their character arcs, Carol Danvers' origins were clouded with memory loss in Captain Marvel and the character is reduced so something of a plot device in Avengers: Endgame. Black Widow's past is similarly mysterious (at least until the release of her solo film) and she is eventually killed off, in part to serve the stories of her male teammates. Perhaps a tighter focus on Wanda's story indicates that the studio is committed to telling stories that allow for their heroines to possess agency and be just as complicated and messy as their male counterparts. As the MCU's second and longest-lasting female Avenger, Wanda's time for deeper explanation is long overdue.

WandaVision's marketing material has alluded to a "Visionary New Age" for the MCU and, considering the franchise's history with sidelining some of its more would-be compelling characters, maybe a change of pace really is in order. The show smartly examines Wanda after years of living in the shadows of the larger universe, playing to Elizabeth Olsen's talents and commitment to the work. By simply giving Olsen material to explore the oft-forgotten Scarlet Witch, Phase 4 is already off to a great start.

Zack Krajnyak is reader, writer, actor, director, and educator based in New York City. A life-long lover of the power of story, Zack utilized critical thinking and writing skills during his time at New York University, where he earned his degree in Vocal Performance/Musical Theatre. When not creating for the stage or screen, Zack enjoys writing about and delving into TV, film, and pop culture, finding new meaning in the properties and stories he loves. Additionally, Zack is an avid baker, saxophonist, and comic book fan.