Where The Hidden Cuts In 1917's One Shot Trick Are 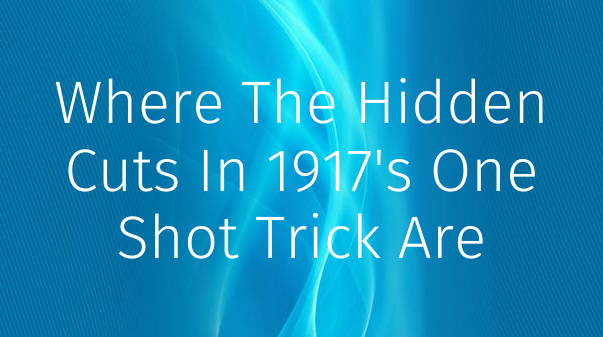 Where The Hidden Cuts In 1917's One Shot Trick Are

Since the epic war film 1917 is a single-shot movie, presented and edited to appear as one continuous take, leaving viewers to wonder where the hidden cuts are located. Directed by Sam Mendes, who spent the last decade directing James Bond films, 1917 tells the story of two young soldiers, Blake (Dean-Charles Chapman) and Schofield (George MacKay), tasked with a seemingly impossible mission during WWI: travel on foot to the 2nd Battalion of the Devonshire Regiment to deliver a message calling off an attack against the German army (the Germans had pretended to retreat in order to prepare their ambush of 1,600 British soldiers, which includes Blake's brother). The film is partly based on an account told by Mendes' grandfather Alfred Mendes, and includes a cast of many famous British actors such as Benedict Cumberbatch, Mark Strong, and Colin Firth.

1917 is being hailed as a cinematic achievement thanks to the story and direction from Mendes, as well as the cinematography from Roger Deakins, who is two years removed from his Academy Award win for Blade Runner 2049. The one-shot approach allows viewers to be fully immersed with Blake and Schofield as their mission plays out in real-time. 1917 is composed of takes that likely range from two to eight minutes, with Mendes using hidden and well-disguised cuts to make it appear that the film is one long uninterrupted sequence. Because of this filming style, months of rehearsal were necessary in order to film sequences in such unusually long takes. That being said, Mendes' one-shot method is a clever and brilliant illusion. Though Mendes hasn't revealed where the hidden cuts occur, there are specific scenes and places in the film where the cuts probably took place.

In 1917, scenes with explosions, objects that fill the entire frame, or changing light levels are the most likely places where Mendes hid the film's cuts between takes. An example of this occurs when Blake and Schofield examine the abandoned German trenches and a bomb explodes, catapulting the duo in opposite directions. Because smoke quickly fills the frame, the scene presents a good opportunity for Mendes to seamlessly end one take and begin another. The same goes for changing light levels: when Blake and Schofield enter a trench and the entire frame becomes black, this presents another great opportunity to hide a transition between takes. Anytime something fills the screen, such as soldiers walking in front of the camera and occupying the entire frame for a split second, a cut can be hidden.

However, there is one single, obvious cut in 1917. In Écoust, Schofield engages in a firefight with a German sniper in an abandoned building. When Schofield tracks the enemy soldier down and kills him, Schofield is knocked out by a ricocheting bullet and stumbles down the stairs. The screen cuts to black for over ten seconds until Schofield regains consciousness hours later during the night. Other than that single interruption, 1917 feels like a true race against time.

The one-shot technique is part of the reason why 1917 is a technical marvel and major awards season contender. 1917 recently won two Golden Globes including Best Director for Mendes and Best Motion Picture - Drama. 1917 will look to follow in the footsteps of other one-take movies such as Birdman that found success at the Oscars. Regardless of the awards, 1917 is a unique war film that deserves your undivided attention, whether you find the hidden cuts or not.

Dan Girolamo is a writer out of New York City who loves pop culture and entertainment. Dan has been covering film and television for close to five years. His work has been featured on entertainment websites such as Hidden Remote and Popdust. As much he loves covering film and television, his true passion lies in sports and in particular, New York sports. His intense fandom for the Yankees, Giants, and Knicks has provided him with some of the best and worst moments of his young life.

Dan’s love for entertainment and sports stems back to his time at Marist College where he studied sports communication and journalism. Besides writing movie reviews for the school paper, Dan was a broadcaster at the school’s radio station, WMAR, where he eventually became the Sports Director.

If you’re interested in either a breakdown of every category at the Oscars or how the Knicks can save their franchise, then Dan is the man for you.