Where The New Elder Scrolls Online Expansion Could Be Set 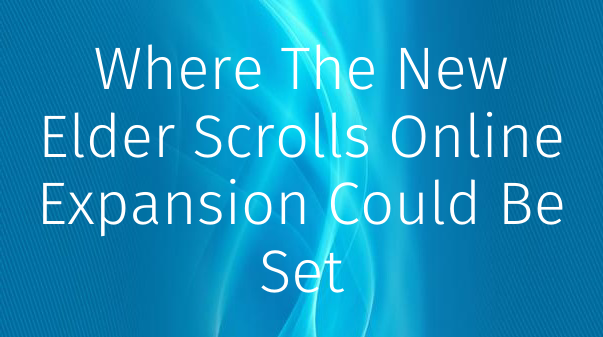 Where The New Elder Scrolls Online Expansion Could Be Set

Bethesda and Zenimax released the cinematic teaser trailer for Elder Scrolls Online's 2022 Global Reveal event at the start of January, set to debut on January 27, although it's unclear where exactly it is set. The trailer featured footage of an unknown landmass, the rocky shoreline of which has proved difficult for even the most invested Elder Scrolls fans to identify. As a result, much speculation has flown about on social media within the last month, from Elder Scrolls Reddit communities to Bethesda's YouTube comments, but little consensus has been reached. That said, a few options seem more likely than others based on what was depicted in the cinematic.

New content in ESO primarily comes in new chapters and expansions, which introduce previously unseen locations, storylines, and characters to the game. Thus far, there have been five major expansions in The Elder Scrolls Online - Morrowind, Summerset, Elsweyr, Greymoor, and Blackwood - with various more minor expansions to help expand the world of The Elder Scrolls Online. The next expansion will be showcased during the Global Reveal event, though it isn't clear what players should expect from the announcement.

Bethesda has revealed so far in press releases that in 2022 Elder Scrolls Online's new expansion will take players to an all-new, never-before-seen location in the franchise, complete with stories and cultures that have yet to be explored in the Elder Scrolls series. Additionally, the ships depicted in the cinematic teaser seem to imply that the upcoming expansion will be politics based, likely revolving around the three major factions in the Elder Scrolls' alliance war storyline as opposed to a new world-ending threat or catastrophe. The armor and architecture in the trailer also seem to indicate that the Breton race will be receiving quite a bit of focus in the year ahead. However, given that their homeland of High Rock has already been included in Elder Scrolls games before, it seems unlikely that it will serve as the primary setting for the next ESO expansion.

ESO could take players to the less-explored Dellese Isles, which have never been properly depicted in the Elder Scrolls games despite being located somewhere within the province of High Rock. The Isles have been mentioned in several previous mainline Elder Scrolls games like Daggerfall and Morrowind, but little is known of them, including their exact location in the region. This makes them a great candidate for The Elder Scrolls Online to visit, especially considering that High Rock's coastline fits what's depicted in the cinematic.

Akavir Could Be Elder Scrolls Online's Next Setting

The mysterious continent of Akavir, located to the east of Tamriel, is one of the most-discussed locations among Elder Scrolls fans. Many have even speculated that it could be a potential setting for The Elder Scrolls 6. Of course, this makes it unlikely that it would feature as the primary location of the upcoming Elder Scrolls Online expansion, but that hasn't stopped theories from popping up since the reveal of the teaser trailer. Setting an Elder Scrolls game in Akavir for the first time could allow for the introduction of the Akiviri races to the game and pave the way for exciting new lore and items to collect.

Pyandonea Could Be A Great Elder Scrolls Online Setting

The island-continent of Pyandonea is the home of the Maormer, which, despite being featured heavily in The Elder Scrolls Online, have a surprisingly small amount of lore and aren't currently a playable race in The Elder Scrolls series. Consequently, little is known about Pyandonea, though the franchise has indicated that the land there is covered in dense rainforest, which could provide a unique and visually exciting setting for the next ESO expansion.

Yokuda is one of the least-explored locations in the Elder Scrolls series, lying to the west of Tamriel and hiding a rich history regarding the origins of the Redguards. Nearly the entire continent sank into the sea during the First Era. Some Elder Scrolls Online fans have speculated that the rocky shore featured in the new cinematic trailer is the tip of the landmass, which could potentially be all that remains of the mysterious mainland of Yokuda.

It's also home to various islands, which aligns with the hints that ESO players have been given thus far. If developers are trying to take players to a brand-new location, Yokuda would be a great candidate. As a location, it could also be a great choice for The Elder Scrolls 6.

The Eltheric Islands Could Be Elder Scrolls Online's Next Location

The Eltheric Ocean is located to the west of Tamriel and is home to groups of significant islands like Yokuda and the potential Elder Scrolls 6 location Summerset Isles. Also found in that ocean are various smaller landmasses, though, many of which have been suggested as potential settings for the upcoming Elder Scrolls Online expansion. For example, Ravan is one of the islands located further out from mainland Tamriel than many of the other locations in the Eltheric Ocean and, as such, would serve as a new setting to explore. Its size, significantly larger than those surrounding it, would also leave Elder Scrolls Online players with plenty of areas to traverse.

The Systres are another unique possibility, consisting of three islands clustered together, all of which are often considered a part of Hammerfell. Some ESO players are speculating that the trailer is hinting at the addition of new and improved PvP elements for Elder Scrolls Online or at least some sort of boating system. This would make a chain of islands the perfect fit for the upcoming expansion.

One possibility that's gotten quite a bit of attention is the island of Stros M'Kai, located near the region of Hammerfell. Hammerfell is widely considered to be the likely setting of The Elder Scrolls 6, thanks both to the 2018 cinematic teaser trailer and subsequent hints dropped onto Bethesda's official Twitter account. That said, Stros M'Kai is already featured in The Elder Scrolls Online and therefore is one of the least likely options on the list.

Its rocky shorelines and potential relevance to the lore and story of The Elder Scrolls 6 has still left it as a contender for the next ESO expansion, however. The Elder Scrolls 6 is still in pre-production. However, teasing its potential location through ESO could be a great way to drum up even more hype.

Perhaps the least likely of the locations identified as a potential candidate for the next Elder Scrolls Online expansion is Anvil, a port city located in Cyrodiil and featured in Oblivion. Although the city's geography and architecture appear similar to what's depicted in the latest ESO cinematic, Anvil has already made an appearance in The Elder Scrolls Online and consequently isn't likely to be the focus of another expansion. This is especially true if the game's latest chapter will focus on the Bretons, as Imperials are the native peoples of Cyrodiil.

High Isle Is The Most Likely Location For ESO's Next Expansion

However, the most well-founded theory regarding the new Elder Scrolls Online expansion in 2022 comes in the form of High Isle, a location so enigmatic that it's only referred to once or twice in the history of the Elder Scrolls series. What is known, though, is that it has something to do with the Bretons and that it's an island region. Both of these clues seem to fit well with what Bethesda and Zenimax have revealed thus far regarding Elder Scrolls Online's coming expansion, and traveling to a location with so little lore is a great way to introduce new concepts to even longtime Elder Scrolls fans.

Ky Shinkle is a Senior Gaming Features Writer for Screen Rant as well as an overall avid gamer and writer. Her prior experience is primarily that of a narrative designer for video games, although her writing has covered all formats from screenplays and novels to stage scripts. A graduate of the Savannah College of Art and Design, when she isn't writing she works on digital media projects and other types of fiction writing. Ky currently works out of Ohio and enjoys spending her free time either playing RPGs or running with her dog.