Which Superhero Would Every Main Harry Potter Character Be? 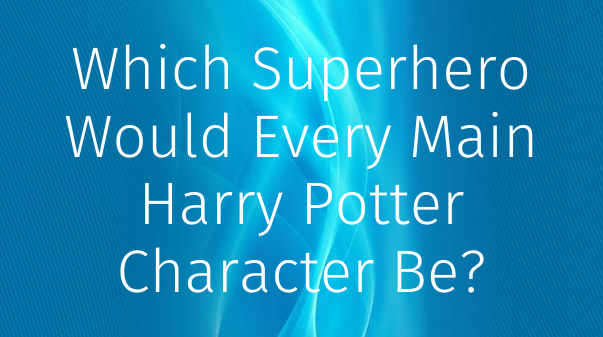 Which Superhero Would Every Main Harry Potter Character Be?

From Hogwarts to superhero-land is not that far a stretch. The witches and wizards are magical, with superhuman powers, namely magic. So how would they fit into the world of the superheroes? Very well indeed. We've got a whole host of characters that translate into superhero-dom quite readily.

Let's go through the list of the main characters. We've got Harry Potter himself, Ron and Hermione. What about Hagrid, Lupin, Dumbledore and Neville Longbottom? Yes, they all have counterparts in superhero-land. Here are 10 Harry Potter characters reimagined into superheroes. Let's have some fun and make a bit of superhero magic.

Harry is perfect for Captain America. As played by Daniel Radcliffe, he's clean-cut, earnest, determined. And he leads his own version of the Avengers, whether it be Ron and Hermione or Dumbledore's Army. Like Captain America, Harry never gives up or loses his sense of mission. They are both dedicated crusaders. And we also have to say that both are stubborn!

Captain America came to prominence during World War II. And Harry truly shines during the Second Wizarding War. Both Harry and Captain America vowed to fight evil, whether it be Voldemort or the Nazis. And, in the end, they prevail.

Okay, Hagrid is more of a gentle giant than The Hulk. But he has, on occasion, waded in with his proverbial guns blazing. It's his sheer size and strength that put him into the Hulk vibe. Like the Hulk, Hagrid is at his best when under pressure. He delivers the goods, albeit in a slightly quieter way than the Hulk.

But the similarities are there: They both display strength, focus, and purpose. Hagrid and Bruce Banner would not have been great chums, we think. But Hagrid and the Hulk would have been allies in the fight of good against evil.

The Dark Knight and Sirius Black are cut from the same clothe. Both are menacing and dark, a force for good with a decided sinister element. Both give you pause for thought. Are they good? Or are they bad? In the Prisoner of Azkaban, which side Sirius was on was in doubt for much of the film. And Batman carries that same vibe.

Sirius and Batman are so much alike, it is a little scary. Now, admittedly, there is not much of playboy Bruce Wayne in Sirius. But when Bruce become Batman, he and Sirius could be soulmates.

Let's face it. Ron is the perfect sidekick. He's never going to be the leader of the pack. But he's (usually) loyal to Harry. And the Boy Wonder Robin is the same as far as Batman is concerned. Both Ron and Robin are there for support and back-up. Now, mind you, Ron does tend to have his moods and be a little more unpredictable than Robin.

But he is almost always there to support Harry (and Hermione). Ron and Robin probably wouldn't be great friends. Robin is a little too keen and eager for Ron's tastes we think. But as sidekicks, both guys are both just about perfect.

Hermione is the absolutely perfect Supergirl. She's smart, determined, well organized and, yes, she can fly. Well, she needs a broom, but it still counts as flying. Like Supergirl, she's determined to make things right. She is hard over on the idea that evil will be defeated and that the good will prevail.

In fact, we can even see Hermione playing Supergirl and vice versa.  And we think that Hermione and Supergirl might as well become BFF. Hermione needs a Supergirl in her life. And Supergirl needs someone who can keep up with her.

OK. We see the problem here. When Lupin goes into wolf mode, he gets up to no good. And Wolverine is a force for good. But if Lupin channeled Wolverine's good guy, superhero vibe all would be well. We can see Lupin transforming into Wolverine, instead of the Werewolf.

Lupin is a good guy at heart. And if we reimagine him into Wolverine, the whole curse problem would be behind him. And that would be a good thing, we think. No, Lupin as Wolverine works. He'll just need to get into weight lifting. A lot of weight lifting.

We knew she was clever, feisty and stubborn, but in Deathly Hallows, Part 2 Minerva McGonagall showed herself to be a fierce warrior, a formidable fighter and a natural leader. She, like Wonder Woman, was right on the front line battling the forces of evil.

Now, mind you, we would probably prefer that she keeps to the robes and doesn't adopt Woman Woman's scanty costume. But that aside, Minerva McGonagall is a perfect fit for Wonder Woman. Just look at the fierce look on both their faces. Scary.

Albus Dumbledore and Doctor Strange are both consummate magicians. Both travel to different realms to fight evil. Both are larger than life characters that seem to have their own reality. Albus Dumbledore would be perfect as Doctor Strange. He could even keep the beard and the robes and still fit right in.

And, it has to be said, that both men have huge egos. We can even see Dumbledore in Tibet consulting the mystic master, the Ancient One. No, Albus Dumbledore and Doctor Strange are the perfect match made in heaven. Sparks will truly fly.

Nerdy, bashful Neville Longbottom transformed as the films progressed. He went from being afraid of his own shadow to being one of the heroes of the Battle of Hogwarts. He kills Nagini, thereby removing the last Horcrux. He was truly transformed into a kind of Superman. Now, mind you, he needs his broom in order to fly, but that's a small thing, we think.

No, Neville became a kind of Superman at the end of the day. With his new buff body, he'd even look great in the bodysuit.

However, left to her own devices Cho prefers to work on her own. Snap, as far as Catwoman is concerned.

Webb Yeager has a degree in Travel & Tourism. He has a second degree in Education. He works in a resort in Hawaii and teaches part-time. He is currently studying online for an M.A. in Film Studies.