Why An Uncharted Franchise Is Bad News For Indiana Jones 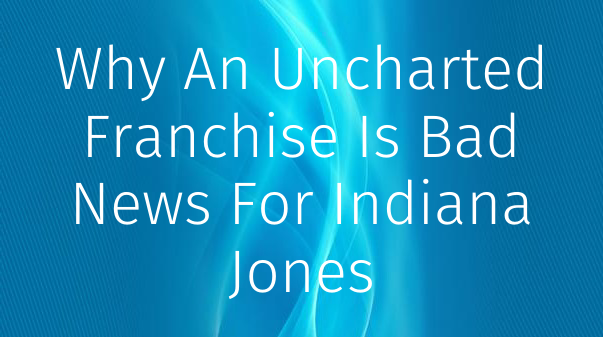 Why An Uncharted Franchise Is Bad News For Indiana Jones

It seems that Uncharted has its sights set on a movie franchise, but more of Tom Holland's Nathan Drake would be bad news for Indiana Jones. With the Uncharted movie's pseudo-faithful take on the beloved video game franchise teasing the possibility of a sequel, it seems likely that Tom Holland will return as Nathan Drake in order to give Uncharted a movie franchise. Uncharted's post-credits scenes offer hints for two separate potential storylines lifted from the games, and despite mixed reviews, it seems entirely possible that Uncharted is just the beginning of a new action-adventure franchise.

Despite its insensitive handling of the video game source material, the Uncharted movie managed to maintain the general spirit of the games, which is one of improbable set pieces, gravity-defying stunts, and hard-hitting brawls with gunplay mixed in. With their globe-spanning, treasure hunting stories, the Uncharted games lend themselves perfectly to movie adaptations, and there are many more stories for a potential movie franchise to explore. However, the possibility of an Uncharted franchise would be bad news for Indiana Jones.

With another Indy sequel on the way, it's possible that Indiana Jones 5 will end Indy's story, but it's equally likely that the iconic franchise will continue on in some form. Given that both Indiana Jones and Uncharted are treasure-hunting adventure films, they'd find themselves in direct competition, and that's not good news for Indiana Jones. While Indy might currently have the better reputation of the two, it's not a franchise with a lot of options moving forward, and that's where Uncharted may well be the undoing of Indiana Jones - although there are a few more reasons why Uncharted is bad news for Indy's future.

On the surface, Uncharted's grounded approach might not seem like a major issue - one franchise could cover more historical-based treasure hunting and the other could handle the myths, legends, and fantastical elements of the adventurers' pastime. While some believe Uncharted risks being too similar to Indiana Jones, this relatively minor distinction could prove to work in its favor further down the line. Uncharted's story might boast a number of leaps of logic, but it's ultimately based on historical elements rather than fantastical ones.

Indiana Jones, on the other hand, takes its cues from legends that have seen the franchise utilize some fantastical plot elements. This may not have hurt its first three films, but its fourth, Indiana Jones and the Kingdom of the Crystal Skull, has been widely ridiculed for its use of aliens. By taking a slightly more grounded approach, Uncharted could prove itself the more enjoyable of the two franchises - and, with Indiana Jones 5 rumored to feature time travel, the franchises' divide between realism and fantasy could potentially widen even further.

While Uncharted's use of its source material isn't as faithful as it maybe should have been, there are a number of nods to the games that show reverence to the film's video game roots. With Uncharted's post-credits scenes teasing future stories being more in line with those of the games, there's an indication that an Uncharted franchise would look to capitalize on that source material. Despite video game adaptations generally being dismissed by fans, it's possible that Uncharted could convert that into a formula for success.

As Uncharted has an existing fanbase from its video games, this is something that a franchise could translate into box office reliability, despite Uncharted making changes to Nate and Sully's origin. Of course, Indiana Jones isn't without its own fanbase, but the periods of time that have been allowed to pass between its sequels have allowed those fans to move on and find other franchises to enjoy. Uncharted's fanbase has been established much more recently, and would likely be skewed decidedly younger - something which would undoubtedly help with the potential franchise's longevity.

Harrison Ford Is Too Old For Action-Adventure Films

Indiana Jones' original trilogy of films cemented the character's pop culture relevance and popularity. However, with 19 years passing between Indiana Jones and the Last Crusade and Kingdom of the Crystal Skull, then another 15 between Crystal Skull and Indiana Jones 5, Harrison Ford is getting too old to continue as the iconic adventurer. Recasting Indiana Jones shouldn't happen, but it most likely will anyway, and that's something that would seriously hurt the Indiana Jones franchise moving forward.

Long-time Indy fans would likely resist anyone who replaces Ford as the actor has become synonymous with the character, but for the franchise to continue, the role would need to be recast. Exactly how (or even if) this will happen is entirely speculative, but with another action-adventure franchise in Uncharted on the rise and the prospect of Indiana Jones' star aging out of the role, it's another reason it could spell doom for Indy. While Uncharted itself isn't responsible for Harrison Ford's age, it opens the field for Tom Holland's Nathan Drake to step in as Hollywood's new top adventurer.

Holland & Wahlberg Are A Major Draw

It's not just Tom Holland that can make an Uncharted franchise work, though. Despite its mixed reception, one thing Uncharted kept from the video games is the chemistry between Nathan Drake and Victor "Sully" Sullivan, largely due to the talents of their actors. Both Tom Holland and Mark Wahlberg are huge box office draws, with both actors regularly well-received by critics and audiences alike. They've also both proven they possess solid action-movie ability and comedic chops, uniquely qualifying the pair to bring an Uncharted franchise to life.

With two huge names heading up the Uncharted franchise, Indiana Jones' future begins to look bleak. Should the role be recast, a new actor would be up against the combined talents of Holland and Wahlberg, as well as needing to win over Indiana Jones' fans. That's a tall order, even for a larger-than-life character like Indiana Jones.

While it's not entirely clear how old Holland's Nathan Drake is in Uncharted, he's certainly considerably younger than Harrison Ford in Indiana Jones 5. With the film acting as an origin story in which Drake meets Sully, there's a clear and natural progression for an Uncharted franchise. Whether this will see more faithful adaptations of the video games' stories remains to be seen, but Uncharted's post-credits scene teases the direction of potential sequels.

On the other hand, the future of the Indiana Jones franchise is less clear. Rumors about the film include a number of potential sci-fi elements, some of which may be used to work in a younger replacement for Harrison Ford. Set photos hint that Indiana Jones 5 will use multiple timelines, which potentially confuses a franchise that has always been relatively straightforward. By moving further away from the action-adventure roots of the franchise, Indiana Jones risks alienating its fans, and an Uncharted franchise could well be there to step in as the new go-to for cinematic treasure-hunting.

MCU Theory: Thor 4 Will Kill Off Zeus To Introduce A New Avenger
About The Author
Niall Gray (226 Articles Published)

Niall Gray is a features writer for Screen Rant covering just about every film- or TV-related topic he's loosed upon. When he's not busy putting words together in various places for various reasons, Niall can usually be found filling his brain with an endless stream of pop culture trivia, teaching children to box, or simply hiding with his nose in a book.