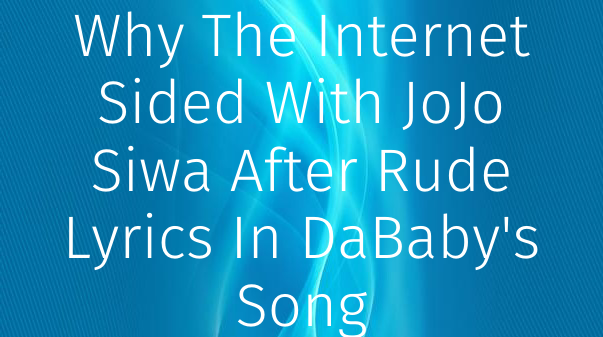 Last week, DaBaby dropped a new song that includes a major diss towards YouTube star JoJo Siwa. Immediately following the song’s release, fans took to social media to decipher why the rap artist would insult the former reality star. It seems the Internet is taking Siwa’s side and is mad at DaBaby in this debate.

JoJo Siwa and DaBaby come from completely different walks of life. The Dance Moms alum and Nickelodeon star records songs for children and sells sparkly fashion at Target. Siwa recently came out publicly and said she’s “the happiest I’ve ever been.” On the other hand, DaBaby is a grown man who’s almost 30 and was recently arrested for carrying a loaded firearm. On February 19, DaBaby released his new song, "Beatbox Freestyle." One of the lyrics references JoJo. More specifically, he says, “Turn me up, n***as gon’ see why / N***a, you a b*tch, JoJo Siwa, b*tch.” In the music video, the rap artist holds up a picture of Siwa on his phone while reciting the rude lyric. As soon as the track released, people swarmed to Twitter and Reddit to question the insult and why it happened.

Ever since DaBaby’s new song dropped on Friday, the Internet seems to be taking JoJo’s side with respect to the hateful lyric. “Can someone please explain why DaBaby is dissing JoJo Siwa when she’s 12 years younger, 10 times richer and 2 inches taller than him,” James Charles, the makeup mogul and influencer, wrote on Twitter. Another user wrote, “I don’t know why y’all think you can tell JoJo Siwa anything when she rollin like this,” alongside a picture of JoJo’s custom car with her face all over it. Similarly to James Charles, someone pointed out that Siwa’s net worth is estimated at $14 million, whereas DaBaby’s is estimated at $3 million. “What DaBaby gonna do when JoJo Siwa tell him stay in his bum a** place,” the Twitter user captioned the facts. To top off all the Twitter comments, someone made this hilarious meme:

DaBaby responded to the backlash on Sunday. “My 3 year old princess is your number 1 fan. I bought her every product you have out. She think she you. Don’t let ‘em trick you into thinking I’d ever have a problem with you. My word play just went over their heads. All love on my end shawty, keep shining!” Some speculate that “Siwa” was a play on the words “see why.” Others thought that maybe DaBaby was making a joke about annoying, continuous children’s entertainment and how it can be irritating for parents. However, a Reddit user thinks differently. “Kinda just says he’s crap at writing lyrics,” the Redditor wrote.

Everyone is clearly taking JoJo’s side in this debate, even though DaBaby attempted to diffuse the situation. After recently coming out as gay, the fans are certainly trying to come together and show their support for Siwa. In addition, it's true that Siwa really is more successful than DaBaby in terms of fame and finances. Regardless of the reason, it seems that everyone can agree the rap artist was wrong to diss the talented dancer and actress.

Veronica Ott is a writer, reader and movie lover based in Toronto, ON. Veronica is currently working towards a Creative Writing Certificate at the University of Toronto with a specialization in screenwriting. Veronica works as a freelance writer for Screen Rant covering the latest news in film. In her spare time, Veronica enjoys the outdoors, cooking, going to the gym and listening to music.