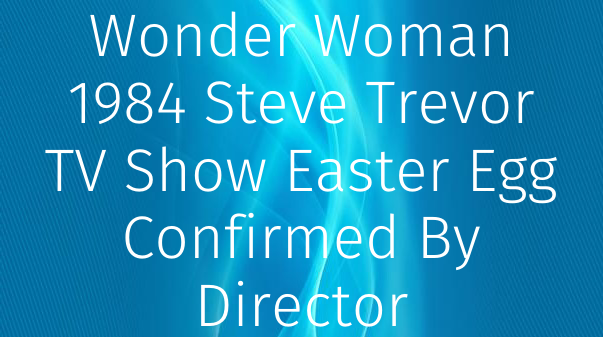 Warning! SPOILERS ahead for Wonder Woman 1984.

Chris Pine's Steve Trevor is not the first version to appear in live-action, though. During the initial television run of Wonder Woman, Steve Trevor and Steve Trevor Jr. were played by Lyle Waggoner. Waggoner played the characters for three seasons, the show's entire run, opposite Lynda Carter. Just like the 2017 Wonder Woman, WW84 contains tons of Easter eggs, both centered on the iconic character and the era it's set within. One in particular, though, has now been confirmed by Jenkins.

Jenkins confirmed on Twitter that in one poignant moment, audiences can catch a glimpse of Waggoner in Wonder Woman 1984. When Steve is looking at his reflection in the mirror and realizes it's that of another man, he looks eerily similar to the original Steve Trevor. Jenkins confirmed that this is intentional. She also said that these things are some of her favorite parts of doing these films - fans finding the Easter eggs is what Jenkins lives for. Check out Jenkins' full response in the tweet below:

Thank you so much for noticing @bugslayerken!!! These are the moments I live for. When all the details are finally seen by the fans. So great. https://t.co/MRqNoS0XYj

Jenkins' reveal adds another emotional layer to the already tragic reappearance of Steve Trevor. When Diana wishes to see her first love again, the Dreamstone grants her wish - at a cost. Diana's powers slowly deteriorate through the film because of the granting of her wish, one that sees Steve Trevor return in the body of an unknown man. Eventually, Diana must relinquish her wish to regain her powers and save the world, but that also means that she must say goodbye to Steve again.

The scene is a difficult one - Diana begins Wonder Woman 1988 very lonely, making the return of Steve all the more satisfying. Still, Diana relinquishes her wish because she knows that her time with Steve can't last forever. Jenkins' Easter egg is another reminder of that and one of a few in Wonder Woman 1984 that recalls the original series. Lynda Carter even makes an appearance, not as her own version of Wonder Woman, but as Asteria, the original owner of Wonder Woman's golden armor. What this means for the future of the franchise is unclear right now, but Jenkins sure knows how to pack an emotional punch, one that longtime fans of the characters will surely appreciate.

Graeme Guttmann is an editor, writer, and interviewer for Screen Rant. With a love for all things pop culture, he watches just about everything from the biggest blockbusters to reality shows like Real Housewives. He currently resides in Boston, MA where he is an MFA candidate at Emerson College for creative writing. You can follow him on Twitter @cryptograeme for pop culture commentary and random musings about pop music and just about anything else.