Wonder Woman Saved the Multiverse Again (But No One Knows) 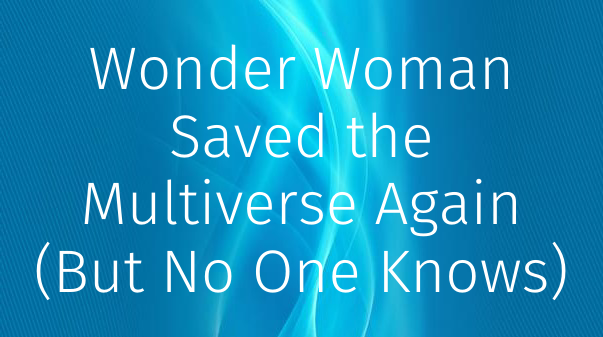 Wonder Woman Saved the Multiverse Again (But No One Knows)

To kick off Infinite Frontier, DC created a major Multiversal threat, which Wonder Woman defeated with the ultimate sacrifice. Now, she has saved the Multiverse again in Wonder Woman #779. While all of her fellow heroes know of her sacrifice during Dark Nights: Death Metal, no one knows she just saved everyone again.

In Dark Nights: Death Metal, Wonder Woman took on the Batman Who Laughs and ended him. She caused the rebirth of her universe and the Multiverse - in a new form. Since then, she has not returned home, having sacrificed herself for the survival of everyone else. Wonder Woman refused an offer to become a higher power in the universe and awoke in Valhalla. Now, after a journey through the Multiverse, she has saved it once more.

Wonder Woman #779 has the creative team of Michael W. Conrad, Becky Cloonan, Travis Moor, Tamra Bonvillain, and Pat Brosseau. The arc that wraps up in this issue has featured Diana chasing the other half of Janus - a dual-identity Roman god. When Janus is finally caught, Wonder Woman has an important choice to make: what should be done with Janus? Her decision has the power to affect the Multiverse.

The gods have a significant amount of power over mortal lives. They can be villains or allies, in the cases of Ares and Zeus. They can even be heroes. However, each god has a role to play with their special abilities. As Diana says in this issue, "we are all connected." Janus isn't just connected by the threads of fate or by general existence. Their abilities are what allow things to happen in the world. One half of Janus is focused on the past, while the other is on the future. Living solely in the past or moving blindly into the future are both recipes for disaster - something that Wonder Woman understands.

Instead of letting Janus' thread be cut, removing them from life, Wonder Woman shows them mercy. She believes they can still learn and be better. After all, living without the past or future is no life at all. There is no purpose without them both in existence. Time as it is known moves, and provides purpose because there is a past and a future. There are experiences to learn from and dreams to work towards. Considering the power of time on the Multiverse and the need for dreams, removing Janus could be the end of the Multiverse. Although Janus has earned a punishment - even potentially death from the perspective of the Fates - Wonder Woman sees the bigger picture at work.

Wonder Woman is the DC universe's ultimate hero, even when no one is aware of her adventures. She is still considered dead, though her death has not been officially announced by her fellow heroes, the Justice League. Yet even in death, immediately after saving the Multiverse from destruction, she is still doing the exact same thing. The universe exists in a delicate balance and Wonder Woman always does her best to dish out punishment or mercy to keep that balance intact.

Samantha King is a Comic News Writer for Screen Rant. She has a B.A. in English & American Literature with a concentration in Shakespeare and a minor in Creative Writing from UTEP. She also has a M.S. in Library Science from the University of North Texas.

Samantha used to get in trouble for reading comics in class back in high school, but she gets the last laugh. She took a graphic novel course in college and now gets paid to write about comics. She runs her own blog at: www.therealworldaccordingtosam.blogspot.com