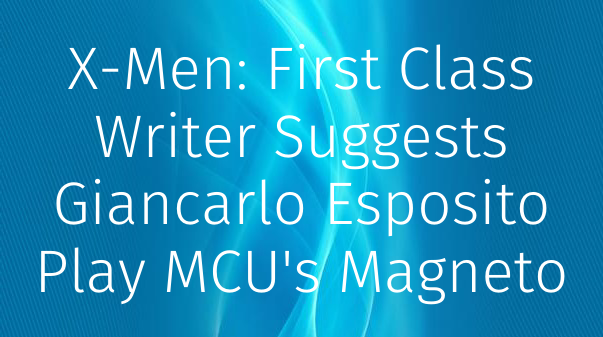 Writer Zack Stentz suggests that Giancarlo Esposito plays MCU's Magneto. Teaming up with director Matthew Vaughn, Ashley Edward Miller, and Jane Goldman to write X-Men: First Class, Stentz knows a thing or two about introducing new versions of the primary X-Men team (except Wolverine). And building on the rumor that the Better Call Saul star is up for a Marvel role, he believes that he could be the next incarnation of Erik Lehnsherr.

Since news broke out that Disney is set to acquire Fox's TV and movie assets, Marvel fans immediately zeroed in on the possibility of the X-Men, Fantastic Four and all their tie-in characters will finally come back home to Marvel. The  historic buyout was finalized early this year, confirming the return of said  character rights to Marvel Studios. And while there's no word yet on when people will see them pop up in the MCU, the public is eagerly awaiting their introduction. Recasting is more likely going to happen with these iconic heroes, and obviously fans have their own picks on who could bring them to life just like Stentz.

Building on an ongoing rumor that Esposito is in talks to join the MCU, Stentz took it to his official Twitter account to suggest that he will be a great casting pick for Magneto. With a slightly different origin story, Marvel Studios can rework him into the usual hero/villain mutant by making him "a Tutsi survivor of the 1994 Rwandan genocide." Check out his tweet below:

Esposito is a brilliant actor who could play nearly any role. But if you wanted to reimagine Magneto as a Tutsi survivor of the 1994 Rwandan genocide...he'd be pretty amazing. https://t.co/ovvzjTOKSM

It's important to note, however, that Esposito joining the MCU is nothing but a rumor for now, so it's best to take this with a healthy dose of salt. But regardless whether this casting news has some merit or not, it's difficult not to be excited with the prospect of an effective actor like Esposito joining the franchise. Marvel Studios president Kevin Feige has yet to talk about his specific plans for the mutants and the rest of their newly-acquired character catalog. And with Phase 4 already laid out, it could take a while before the public can see them re-imagined in the MCU. Despite that, it's never too early to ponder on the possibilities, and Stentz made a very interesting one.

Fans have varying opinion on the matter, evidenced by the comment section on Stentz's post. Comic book purists are serious about maintaining certain aspects when adapting print characters on the big screen. But at the same time, Marvel Studios has never shied away from updating their characters and trying different treatment for them without losing their core values. Spider-Man is a shining example of that, and it continues to do that in an effort to differentiate this version from past iterations. Considering that Fox came up with two brilliant versions of Magneto (and Professor X), it won't be outside the realm of possibility that the their upcoming MCU iterations will be quite different.

Accidental movie and TV fan who is perpetually curious, Ana rekindled her love for writing and married it with everything pop culture. The result is a passionate writer who could ramble (and of course, pen) about films and series multiple hours a day. She has a soft spot for procedurals and old sitcoms (The Golden Girls!) but won't dare watch any horror films although she’s (ironically) dying to see one. Though a bit late to the party and was an actual Force non-believer, she now finds the Star Wars franchise quite fascinating (fun fact: it was a crazy Jar Jar Binks/Sith theory that drew her in).