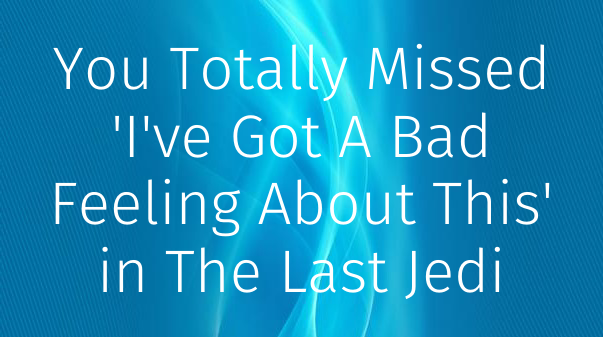 Star Wars: The Last Jedi viewers are taking to social media in an effort to locate the iconic "I have a bad feeling about this" line in the film—leading it to a record-breaking opening in the process. There's no shortage of iconic moments from the original Star Wars trilogy that have become running gags and homages in subsequent films and pieces of media. Naturally, many of these were turned into Easter eggs in The Last Jedi—but a major one is hiding in plain sight.

There's a lot of fanfare around unique phrases like "May the Force be with you" and "Do or do not, there is no try," a more common refrain has become just as much a part of the Star Wars lexicon. Since A New Hope, every Star Wars film has uttered some variation on the phrase "I have a bad feeling about this." It's become a recurring part of the franchise and—when factoring in books, comics, TV shows, and video games—the saying has been uttered over 100 times in Star Wars media. Naturally, it's also becoming an indelible part of modern culture, leading many fans to search it out whenever a new Star Wars film arrives. But Rian Johnson finds a clever way to upend expectations for the line in The Last Jedi.

RELATED: What Does The Last Jedi Reveal About Snoke’s Backstory?

While there's been no official confirmation of where the line is heard, Johnson has taken to Twitter to assure fans the line is in the movie. Twitter user Adam Frazier, however, believes he knows who utters the infamous quote.

"I've got a bad feeling about this." pic.twitter.com/gGBhIQfFXA

With Johnson confirming the line is in the movie and no viewer (including us hear at ScreenRant) able to find a version of the quote said in English, it's safe to assume an alien or droid does the deed. BB-8 and Chewbacca would be the most likely candidates in this case, and the scene Frazier highlights certainly seems to fit the bill. Not only does Poe's response match up with BB-8 chirping "I have a bad feeling about this," but Leia's response lines up, given how often she's heard the phrase.

A New Hope first featured the line in the form of Luke saying ""I have a very bad feeling about this." as he and his friends approach the Death Star. It's Han's rendition, however, of "I got a bad feeling about this." as the walls of the trash compactor close in that's become somewhat more iconic. In the films alone, the line has been said by Obi-Wan, Anakin, K-2SO, C-3PO, and Leia as well. Giving the line to BB-8, then, is in line with the passing of the torch we've seen before and he's hardly the only droid to get the honor.

Johnson's variation on the classic is in keeping with his tonal choices throughout the rest of Star Wars: The Last Jedi. It's the first time the film has featured the line in a language the audience can't understand, thus toying with the expectations of fans. All throughout the latest entry in the Saga, Johnson subverts the tropes and mythology of Star Wars and teases the audience by never taking key moments too seriously. As such, it only makes sense that the iconic "bad feeling" line is sent up in Star Wars: The Last Jedi as well.

NEXT: Leia Used the Force in George Lucas’ Original Plans for Star Wars 7-9